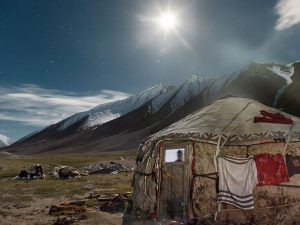 Yurts have always been traditional homes for the Central Asia nomads since time immemorial. The yurts are portable, rugged and circular felt-covered tents that you will often see while you are taking your tours around central Asia especially in Kyrgyzstan. It is usually made from wood and drawn together using camel tanned-skin strings. It is finally decorated using Kazakh traditional embroidery after it has been covered using felt rugs. The fascinating thing about the yurt is the temperatures in it. It is usually cool in the summer and warm in winter. The yurt parts have continuously been upgraded during its long time of being since its creation before its arrival to its present brilliance. It takes approximately one hour to set it up and to bear the fact that it is portable; it can be transported by two horses or camels. 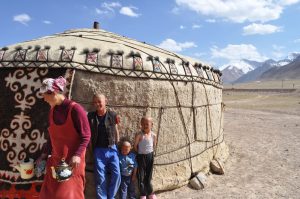 Yurt camps in Central Asia are a common tourist destination. Yurt camps usually have a few permanent yurts that were used years ago by the nomadic people of Central Asia. They are magnificently ornamented with traditional embroideries, sherdaks which are the felt rugs and carpets that are hand-made. Due to the modernization of the world, a majority of the yurt camps have an electricity network. The camps also have a separate ablution block, well-designed dining room that is decorated and not forgetting a traditional kitchen.

The yurt camp is the beginning of adventure tours where you can have a long or short camel riding tours. While you are trekking, you 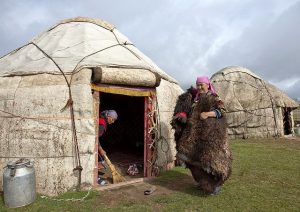 can get the opportunity to see hares, desert agamas, tortoises and even herds of Carmel but all this will depend on the season of the year. If the yurt camp is situated close to a lake, the tourists can have freshly caught fish or swim or even look at the reach aquatic bird life comprising of beautiful birds like the pelican, duck, cranes, etc.

Ski your heart out in Kyrgyzstan's Tien Shan wilderness that is bursting with opportunities for great powder skiing.  Whether you are an experienced skier/rider or just starting out in the s ...