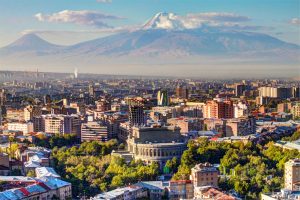 The largest city and the capital of Armenia –Yerevan has very rich history for more than one thousand years. The Yerevan city was founded in 782 BC by the Argishti King. Firstly, the fortress was built which took the name Erebuni. After, the city with the same name started to grow around the fortress. Archeological findings prove the age of ancient city. . Despite the fact that Erebuni – Yerevan was not the capital, it is known as one of the strategic and cultural centers of Armenia in general, especially in the Ararat valley. At the ancient times and the Middle Ages Yerevan played crucial role in political life and economic aspect of the country, as it was located on the crossroads of trading routes, being the center of trade. 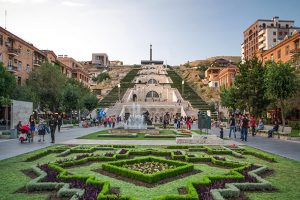 However, numerous invasions of conquerors of VII-XI centuries – Arabs, and then Seljuk Turks, with  periods of relative peace, damaged significant part of the city, under the walls of which were persistent devastating fights.

Yerevan 14 times passed from hand to hand, and each time it suffered significant destruction, but the most devastating time was for Yerevan the invasion of Shah Abas I in 1604. In 1679, as the result of the earthquake, most part of the city was completely destroyed. Yerevan has seen many black pages along the path of its development. However, the capture of Yerevan on October 1, 1827 by Russian army and other victories of Russia in Transcaucasia forced Persia to sign the 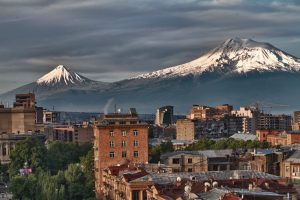 Turkmenchay Treaty and forever leave the occupied territories. In the nineteenth century Yerevan started new page of its rapid development.

Only in 1920 Yerevan gained a status of capital city. The whole construction of the city began in the 1930. The final plan of the capital was laid by the special-invited architect from St. Petersburg , Alexander Tamanian. He could create totally new look of capital, which included very soviet style with Armenian traditional ornaments. Modern Yerevan is located on the beautiful Ararat

On the hill of Arin-Berd not far from the center of Yerevan there is an ancient historical complex – the Erebuni fortress. On theterritory of the fortress-museum you can now visit the Argishti Palace, several temples, houses with rich decoration. The excavations began in the middle of the 19th century and are still being carried out – as many as one hundred hectares of land has been cleaned from centuries of mud. Tourists can discover the amazingly beautiful frescoes with well-preserved paintings of the life of the ancient people of Urartu. Make sure to look into the temple of Haldi, the main god of Urartu. In the fortress-museum you can not only discover ancient artifacts (jugs, fragments of cuneiform, coins, ornaments), but also buy souvenirs in the form of their exact copies.

Beside, the ancient historical monuments there are a lot interesting places to visit in Yerevan like number of museums, theaters and other buildings which play crucial role in cultural life of modern city.