Vardzia: the story of an ancient city 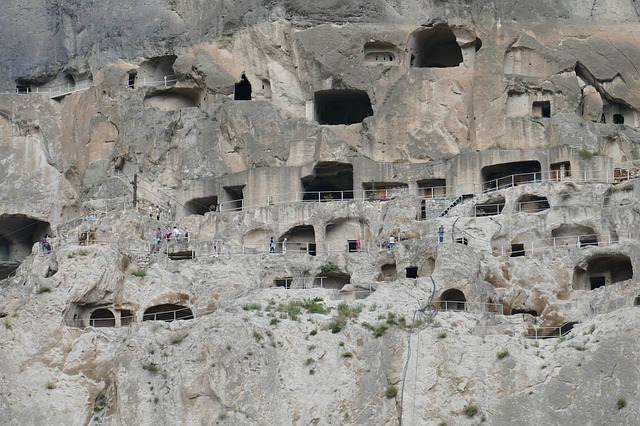 History and interesting facts about one of the most beautiful places in Georgia – Vardzia.

Historically, in Georgia – a country of high mountains and stone cliffs – a special type of architectural art has developed – carving in rock monoliths of temples, fortresses and even entire cities. The objects of such unique architecture were such great Georgian monuments as the cave city of Uplistsikhe, the complex of monasteries David Gareji and the amazing ancient city of Vardzia.

The cave city and monastery of Vardzia invariably fall into the lists of the most interesting places as well as historical sights of Georgia. We all saw many castles, 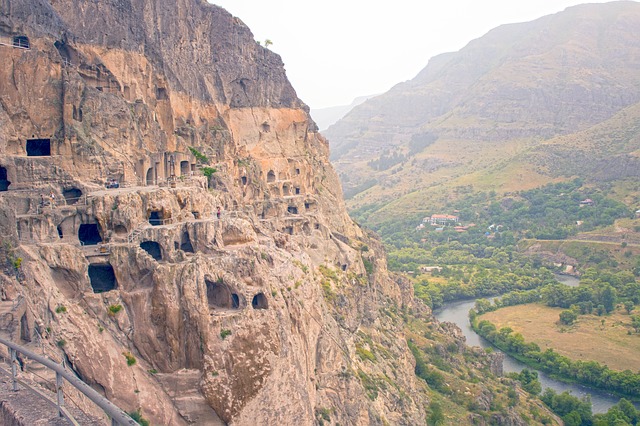 churches, and palaces – there is something similar in almost every tourist city in the world, and therefore over time, they cease to be as impressive as at the beginning. But it will be interesting for everyone to visit the ancient city, carved into a monolithic rock high in the mountains.

There is another famous cave city in Georgia – Uplistsikhe. Due to its convenient location near Tbilisi (only an hour and a half drive away), is even a little more popular. But both rock complexes are very different. It is recommended to go visit Georgia and 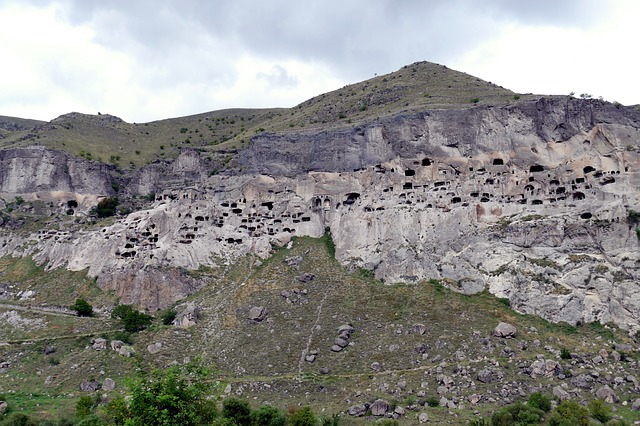 to see everything with your own eyes and compare.

Vardzia was carved into the wall of Mount Erusheti in 1185. The Georgians attach particular importance to this place: it recalls the great Queen Tamara. The offensive of the Golden Age of Georgian history is associated with this complex.

The Cave Town of Vardzia is the most valuable architectural object among all of the architectural wealth of Georgia. This rock-hewn town used to have houses, libraries, shops and even running water. There were about six thousand rooms at 13 levels of the town.

Queen Tamara ordered to construct an underground sanctuary to help Georgians avoid the Mongol inrush. So her people secretly started to build this fortress under the Erusheli mountain. It was a huge job to do, but Tamara’s people worked hard with the resoluteness that their traditions and the culture as a whole should not be destroyed by the Mongols.

It took about 50 years to build this complex, the caves were carved by hand. In the case of danger, this place could shelter 50 thousand people, and later it became a monastery as well as one of the most significant education centers.

The history also says that Queen Tamara herself stayed there and prayed for her husband who was going to a battle with Seljuks. He victoriously emerged from that battle.

1283 became tragic for the Cave Town. Nearly a hundred years after the end of construction, a huge rock’s part collapsed into the valley, where Vardzia was located and destroyed two-thirds of it.

The monastery was ravaged by the Turks and Persians and a community of monks still lives there. About 300 «cells of this town are open to visiting and in some tunnels of Vardzia, there is drinking water that flows through the ancient pipes.

What does Vardzia mean?

There is not an accurate historical origin of the name “Vardzia”. But there is a popular legend that is not fixed in any historical documents of that time and can be not true, but people still believe it.Â

An interesting fact related to the appearance of this monastery’s name, a folk legend makes reference to the childhood of Queen Tamara. It says, that Tamara, while being a little girl, once played in the caves of the monastery with her uncle and got lost.

Tsar George III, learning about this incident, ordered to name the monastery only as Vardzia. He considered that the incident with the girl was a prophetic omen.  Unfortunately, the name of Queen Tamara’s uncle has not remained in history, but any guide will connect this place not only with Tamara and her father George III but of course with Queen’s uncle.

It is also very important to know that despite its rich history and its antiquity, Vardzia also has a modern history. The great Georgian poet Shota Rustaveli was born and worked in this part of Meskheti.

Many are familiar with Rustaveli’s poem entitled «The Knight in the Panther’s Skin», but not many know that most of this famous poem was written here, in the Vardzia Monastery. It is believed that Vardzia created a special atmosphere for the poet, where he was admired and inspired by the exploits of his ancestors. It was an amazing world of romantic heroism.

In 1966, the Shota Rustaveli Memorial Museum was opened in Vardzia. This led to the fact that not only travelers who are connoisseurs and lovers of history began to come to this place, but also the fans of the Rustaveli’s works.

The famous cave monastery of Vardzia: how to get there?

There are many places where your journey can begin, but the last stage of your route is likely to be the city of Tbilisi, the capital of Georgia.  Further, the route passes through Akhaltsikhe and then you walk a little.

We hope you found this article useful and informative. If you want to learn more about Georgia just go read posts of our blog by tag «Georgia». An article about other ancient cave cities of Georgia can also be found there.

From
$1185
Price from 1185 USD to 1660 USD per person (the price depends on a group size). The price 1185 USD per person is available for groups of 6 people.
More info
Login
Signup
Forgot password?