Travelling by trains in Uzbekistan

During my unforgettable journey in Uzbekistan I traveled internally between cities by trains – luckily Uzbekistan offers this affordable and comfortable opportunity to explore its numerous awesome treasures! To book the tickets for Uzbek trains you should write in advance to some travel companies in Uzbekistan and ask them to buy you a ticket for a certain commission.

Another option is to buy tickets on arrival in Uzbekistan. Remember that without registration you may not be able to buy the 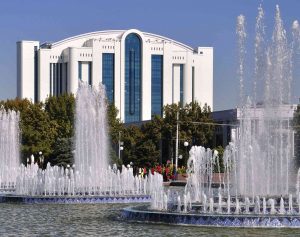 ticket – according to the rules you must show it to the cashier. On the spot, buying tickets is cheaper. But the train tickets here are really cheap in fact.

The trains offer compartments with 3 and 6 seats. The train “Shark” goes from Tashkent to Samarkand for 3.5 hours, it leaves Tashkent at 8-30 and at about 12-00 arrives in Samarkand. On the same train, I continued my journey from Samarkand to Bukhara, having spent on the road for about 3 hours.

Uzbekistan trains are half empty, there are not many people here, the air conditioner works. So along the way Tashkent-Samarkand and Samarkand-Bukhara, I was alone in a compartment for three people. I found it to be really comfortable!

The timetable can be found on the website of Uzbek Railways http://www.uzrailpass.uz/. There is no sale on this site, neither for foreigners, nor for residents of Uzbekistan.

Between Tashkent and Samarkand there is a handsome high-speed train “Afrosiob”. Between these cities the train goes only 2 hours. This train is also called Spanish, from the country of acquisition.

I also had 2 night trains: Bukhara-Urgench (runs once a week) and Urgench-Tashkent (runs on certain days of the week). 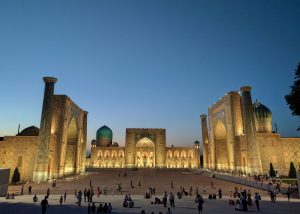 At the railway stations operates the same system of entry and admission, as at the airport. Accompanies remain outside the territory, leaving people go to the station, showing a passport and a ticket. Then, at the entranceto the station building, the departing person again presents his passport and ticket, puts the baggage on the tape for inspection. And then you have to go to a special table and put a stamp on the back of the ticket. This is called registration.

When I received tickets at the railway ticket office, I noticed that at the very bottom of the form it is written: “the registration of passengers ends 30 minutes before the departure of the train.” However, in reality everyone is allowed to go, everyone helps, the militiamen indicate where the numbering of wagons comes from, help women carry young children, then porters (4000 UZS costs a trolley, that’s a little more than a dollar).

I was really impressed by the stations themselves. There are no homeless people, no gypsies, no idly vacillating personalities etc. Again, everywhere the police, everywhere clean and tidy, the staff always sweeps and rubs something. And the stations are like palaces – all of marble and glass. All buildings are modern, spacious and large. It is very pleasant in them. Remember that it is not allowed to take photos at the railway stations in Uzbekistan.

Enjoy your romantic and fascinating adventure holidays by train along the footsteps of ancient caravans!