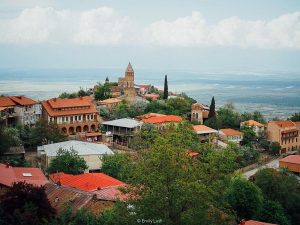 Kakheti is the wine region of Georgia. It is here that the main vineyards of the country and numerous wineries are concentrated. The best time to visit the Alazani Valley is the fall, when they harvest. The cars, loaded to the top with grapes, create a festive atmosphere and truly convey the spirit of the wine region. But if you are planning a trip at another time of the year, then in Kakheti there are truly interesting places: ancient cathedrals, nature reserves with spectacular views, furthermore wineries work all year round. Kakheti is also distinctive, unique in its landscape and winemaking traditions, the Alazani Valley, surrounded by Tusheti mountains.

Kakheti сame a long way of historical development: it was part of the Kartlian Kingdom until the 8th century, from the 8th to the 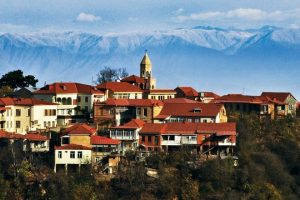 12th centuries developed as an independent principality, from 12 to 15 centuries was part of the Georgian Kingdom, from the 15th century until the mid 18th century again won its independence. In In 1801, Kakheti together with Georgia became part of the Russian Empire, and since 1991 Georgia is an independent state. Since the Kakheti is located not so far from Tbilisi, it is easy to reach. You can also buy a tour from the old part of Tbilisi, there are various types of tours with different prices.

The main cities of Kakheti are Sighnaghi and Telavi. Sighnaghi is a small town built in the 18th century on the mountain peaks above the Alazani Valley by the Georgian king Irakly II to protect against the raids of the Lezgi and Persians. The city with its narrow and winding medieval cobblestone pavements and beautiful old buildings, renovated in 2005, is a great place to relax. Sighnaghi has preserved fortress walls with numerous towers and gates.

Discovery of the administrative center, Telavi, should become an indispensable part of traveling in Kakheti. The foundation of the city dates back to the 8th century, when the

fortress Batonis-Tsyhe was built here. In Telavi, the cultural program is quite extensive. You can visit the Telavi State Drama Theater, the Telavi Museum and other interesting historical attractions. The compulsory program includes inspection of the fortress walls and towers of Batonis Tskhe, the Kavta temple and the Cathedral of the Nativity of the Blessed Virgin Mary, a walk through the Nadikvari park. Visitors should go to the market in Telavi, to taste wines in wine shops and national dishes in local restaurants and cafes.

Kvareli tunnel cave is – one of the most famous attractions of Kakheti in general and Kvareli district in particular. It  is a section of a real tunnel in the rock, which currently houses a wine shop, tasting room and a small ethnographic exhibition. All this is located on the territory of the winery company “Khareba” and is regularly visited by tourist groups. It is believed that the total length of all the cave is not 7, but 11 kilometers, but only two pieces are shown to tourists: tunnel about 700 meters long and another, dead-end, going 500 meters away from it.