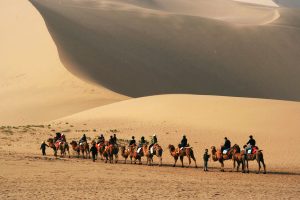 The history of the Great Silk Route. The route is called “silk” because of the trade item. A “great” came to be called because it linked the endless territories of the eastern regions with western countries, trade revived in numerous cities, located on the way of caravans. That’s why it became a part of history as the “Great Silk Route”. According to archaeological excavations, silk production has started in China in 2750 BC, sometime between V-II cent. BC silk became exported for sale or exchange.

The Great Silk Route begins in the basin of the Yellow River in China. It passes along the western part of the Great Wall of China and along the Ili River and reaches Issyk-Kul lake in Kyrgyzstan. From this point the route 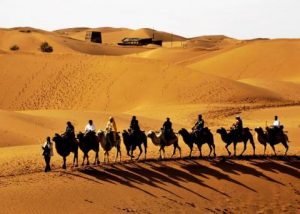 Influence of the Great Silk Route on the world economy development. According to Chinese sources, the first caravan with silk went to Western countries in the middle of the 1st century BC. Following this, caravans with various goods from eastern and western countries, from the shores of the 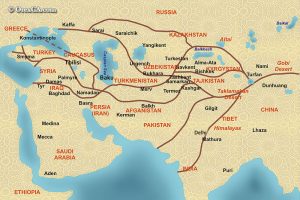 Mediterranean, from the Near and Middle East, from the countries of Central Asia, went to China.

Internationally traded became such exotic animals as: the famous horses from Central Asia, from Eastern countries – elephants, rhinos, tigers and lions, birds of prey, etc. Along the trade route were carried dried fruit grown in Central Asia – raisins, melons, dried apricots, oriental sweets and was also started the trade of seeds of vegetables growing in distant countries. So, the Bulgarian and Chinese peppers spread to other countries thanks to the Great Silk Route. 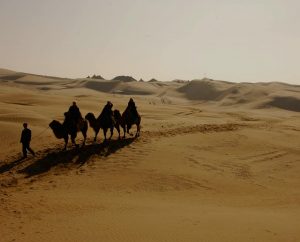 Although silk was spread all over the world, the secret of its manufacture by the Chinese was kept in great secrecy. Nevertheless, there were brave souls who managed to steal this secret. The silkworm cocoons were takenfrom China in cane reeds and in women’s hair. Thus, already at the beginning of new era, silk was cultivated in Byzantium and Sogd. In the latter country, it was cultivated in such quantity that Sogd began to compete with China itself. So, in some Chinese cities there were their trading colonies. And the last point of the Silk Route ended in the ancient capital of Japan – in the city of Narga, where there were outlets selling silk. The main proof of this is the manuscript preserved in the local monastery, written in Sogdian. Then silk began to be produced in Japan and the Caucasus. So, thanks to the Great Silk Route, secrets of silk production were mastered all over the world.

Influence of the Great Silk Route on world culture development. During the trade, the countries located along the Great Silk Route were also involved in cultural ties with each other. The subjects of trade were furs and skins, carpets, dishes, products made of precious metals. For example, during the archaeological excavations in Taraz, Kazakhstan were found surprisingly beautiful silver jugs made by Byzantine masters. During the excavations at Talgar, Ispijab, Otrar Oasis and other medieval cities of Kazakhstan, unique samples of Chinese porcelain ware were discovered. It is clear that such basic necessities as dishes were made mostly on the spot. Local craftsmen tried to adopt the secrets of pottery, imitate other masters, compete with them, contribute something of their own. This is how the exchange of cultures took place.

On the Silk Road there was an exchange not only of objects of material culture, but also of other types of culture, especially in the field of music. So, a beautiful wooden sculpture of the girl-dancer was found in Penjikent, Tajikistan.

The influence of the Great Silk Route on the development of international relations. The Great Silk Route facilitated the establishment of diplomatic relations between the countries of the East and the West. According to Chinese manuscripts, the ambassadors sent by the Chinese Emperor Wu Di in 138 year to Western countries returned only 13 years later. After the return of this delegation, China’s trade relations with Western countries continued via Kazakhstan and Central Asia. And finally, from the West started to come caravans with goods to China.

Thanks to trade connections in 568 year diplomatic relations were established between the Türkic Kaganate and Byzantium. The two countries have established a trade-diplomatic union among themselves in opposition to Iran. The exchange of ambassadors strengthened international trade.

The Great Silk Road contributed not only to the development of trade between countries, but also created an atmosphere of friendship and trust on a global scale!

From
$1550
The price depends on a group size. The price 1550 USD per person is available for groups of 4 people.
More info
9 days

From
$2540
The tour price is 2720 USD. The price doesn't depend on the amount of people in a group. The tour will be fulfilled even if only one person buy it.
More info
11 days