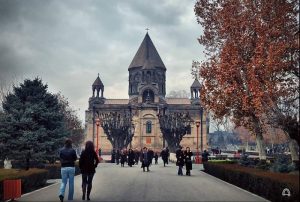 Echmiadzin city, first of all known as the religious center of whole Armenia. Local people revere this city. If we look to the history, it will become clear why Echmiadzin is considered to be very holy place. If you are visiting Armenia but not the Holy City, you will definitely regret. Because, it was here that the originality of the Armenian national culture developed over the centuries, it was here that the important center of the formation of Armenian statehood was located. Echmiadzin is situated not far from Yerevan city in the Ararat valley. The city is not big, though it has main attractions of the whole Armenia.

Armenian churches are ascetic,but not the Cathedral. It is distinguished by a special Byzantine luxury. The dynasty of artists Ovnatanyan painted the temple for several centuries. You will not see such a painting in any other Armenian Church. The walls depict scenes from the Holy Scriptures, and 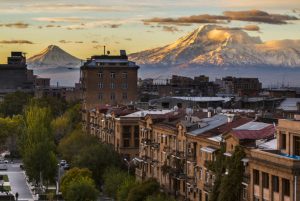 the ornaments are made in golden-red and blue-purple tones, which symbolize paradise.

Cable car Wings of Tatev was built recently, in 2010 and it is listed in the Guinness book of records as the longest cable car in the world (5752 meter). There are two cabins on the line with a capacity of about 15-20 people. These two cabins move according to the schedule, towards each other, meeting approximately in the middle of the road. The Wings of Tatev is located in 170 kilometers from Yerevan and it connects Alidzor village with the Tatev

monastery. The ride on the cable cars last about 15 minutes! 15 minutes of spectacular views all around! You will have a chance to discover the authentic beauty of Armenian nature. After 15 minutes of unforgettable ride you reach the Tatev monastery.

Any attraction in Armenia is imbued with meaning and deep history. There are many monasteries in Armenia, but Tatev is a special place to visit. The monastery is located around an extraordinary beauty. The building itself is large and ascetic, like most Armenian monasteries. The views are stunning! The monastery was built in 9 century in very isolated place. This is the must-visited place in Armenia!

The best way to discover this kind of historical places is to take local guides, who can tell you crucial things about the history. After learning the history and context, each place will have special place in your memories.