Stages of the Kyrgyz wedding: what parts it consists of 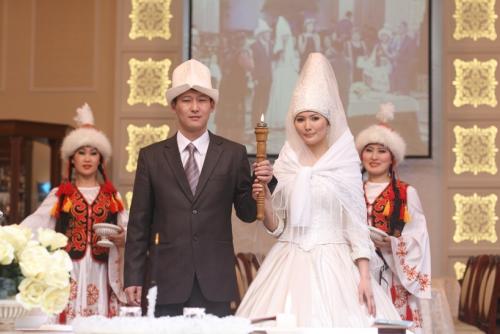 Marriage in Kyrgyzstan is one of the most responsible events. In this material, you can read about how does a traditional Kyrgyz wedding go.

Note that the following are the most common types of events. All the details of the celebrations and their sequence depend on the families of the bride and groom, the region and how do the families agree among themselves. The information provided in the article was not taken from all regions of Kyrgyzstan, so differences may well occur.

But basically, the events in different regions are more or less similar, because despite all the regional divisions, this is 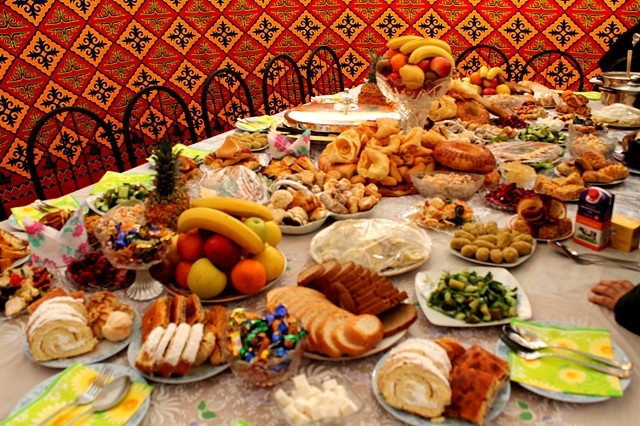 still one country and Kyrgyzstan culture is spread throughout its territory.

Future kudalar (matchmakers) get acquainted a few months before the wedding so that there is enough time for preparation. As a rule, an acquaintance takes place in a cafe or in a restaurant where the parents of the bride are invited by the parents of the groom. The family of the groom also pays for the event. The number of participants in such meetings varies for each family.

During the meeting, future relatives do not just get acquainted, but already begin to discuss the upcoming wedding and all the events that will be before and after the wedding. They agree on how many seats in the restaurant at the wedding will be allocated for the relatives from the bride’s side (usually from 40 to 80 seats). It depends on the material possibilities of the groom’s family who arranges the wedding, and the number of relatives of the bride. Of course, the date of the wedding and kyz uzatuu is being determined too.

This meeting is the most important because the families need to make a good impression on each other and try to make the upcoming wedding not very financially expensive.

Kyz uzatuu is an optional event, and therefore not all conduct it. Usually, this is an alternative to a wedding when the bride has many relatives and it is not possible to invite everyone to the main celebration, because there are not enough places that the groom has allocated. In terms of scope, it is almost a wedding with slight changes. Bride’s family finances a holiday. The bulk of the guests are also the relatives of her.

Kyz uzatuu is held in a cafe or restaurant with the same number of dishes as at a wedding. The family orders photo and video shooting, arranges a photo zone. Guests are entertained by artists and, of course, the host. The climax of the celebration comes when the future mother-in-law puts on the bride’s earrings. Also, the groom’s father gives kalym (kyrgyz bride price controversy) to the bride’s father (if there is no father, then this role is played by the eldest man in the family – grandfather, uncle or older brother). Kalym is usually given in white cloth.

In the south, bata toy is held to receive the blessing of the elders. It is held by the bride’s side, but the groom’s side makes a good financial contribution up to the purchase of products.

What is done if Kyz Uzatuu Toy is not carried out?

If kyz uzatuu was not (and sometimes even carried out), the groom’s relatives (from 10 to 25 people) visit the bride’s house before the wedding, pay a kalym, and hold the ceremony of putting on the earrings to the bride. This is called “Aldyna Tushot” or “Astyna Barat”, the meaning of the tradition is that the groom should be the first to come to the bride’s house and pay all that is due, as the daughter of the family is being taken by him.

Also, the groom’s side pays the mother of the bride “sut aky” (payment for mother’s milk) – an amount equal to the cost of one cash cow. But nowadays, the mother of the bride is often given a piece of gold jewelry.
The gifts do not end there: the groom’s side always gives one live ram or an amount equal to its value, in some regions, they also give the horse.

If both sides agreed to give each other kiyit (clothes), then they exchange them at the end of the evening. The most common form of kiyit is a shirt and a scarf. Also, elders are presented with chapans, others with costumes, cardigans, coats, etc. Sometimes they decide not to give kiyit or give money instead, as it’s hard to pick up a thing that they will wear.

When introducing the bride and groom to new relatives, both parties must give money, this is called a “korunduk”. Everyone decides for themselves how much to give. Usually, it is about 200 to 5,000 thousand som.

When is the bride taken away from the parental home?

This point can also be discussed. It doesn’t matter if the groom will pick her up before the wedding from the Kyz Uzatuu celebration from the restaurant or right on the wedding day from the parent’s house.

When the daughter-in-law arrives at her husband’s house, she is met by numerous relatives. There is a ceremony “Kelin Joluk Saluu” (putting on a scarf to the bride). The scarf must be necessarily white, the mother-in-law puts it on her. Sometimes the mother-in-law, at will, allows this ceremony to be held by another respected woman from the family so that the newly made kelin (daughter-in-law) inherits her qualities. For example, it may be a woman who became famous as a good kelin in her youth or who has many children and a happy marriage.

Nike is a Muslim wedding ceremony. It is held in different ways for everyone: either in the house of the bride’s parents, or on the wedding day before the party in the restaurant, or upon the arrival of the bride at the husband’s house. It is important to hold it before the wedding night so that the spouses’ relationship is legal before God.

Finally came the day of the wedding itself. Everyone knows how a modern secular wedding is held in Kyrgyzstan. But some moments are invisible to ordinary guests. For example, it’s customary to cut a horse for a wedding, the sacrum of which is presented to the bride’s father, he gives money in return. The amount may be different – from 1 thousand to 10 thousand som. This rite is called “Ucha Tartu”. This is done to honor new relatives.

After the end of all previous events, the bride’s parents invite their daughter, son-in-law, and matchmakers to visit their house. This meeting is called torkulotuu, which means that now the path of the newly-made wife to the parental home is open. Before this event, she should not go home according to tradition, but there are exceptions in modern realities.

This is where all the important wedding events end.  As you can see, a wedding in Kyrgyzstan is a very important event that takes a lot of time, effort and money.  Despite the fact that in our time Kyrgyz weddings are very different from those that were before, the Kyrgyz still try to comply with all wedding traditions, because this is a very important part of the culture of Kyrgyzstan as a whole.  We hope that this work has given you a brief idea of ​​how weddings are held in Kyrgyzstan.

Unfortunately, not all Kyrgyz girls marry of their own free will, in this article we have collected material about, alas, a popular topic in Kyrgyzstan – bride kidnapping.

Enjoy a short yet interesting trip to the pearl of Central Asia - Lake Issyk-Kul. We have three days to start the journey in Bishkek, then go to Issyk-Kul region and stay at the main city - ...

What could be more exciting than 6 days of biking through picturesque nature, historical sights to the beautiful mountainous lake Song-Kul? During this kyrgyzstan tourism packages, we will s ...

From
882 €
Price from 882 EUR to 1001 EUR per person (the price depends on a group size). The price 882 EUR per person is available for groups of 4 people.
More info
Login
Signup
Forgot password?