Soundtrack of the Silk Road 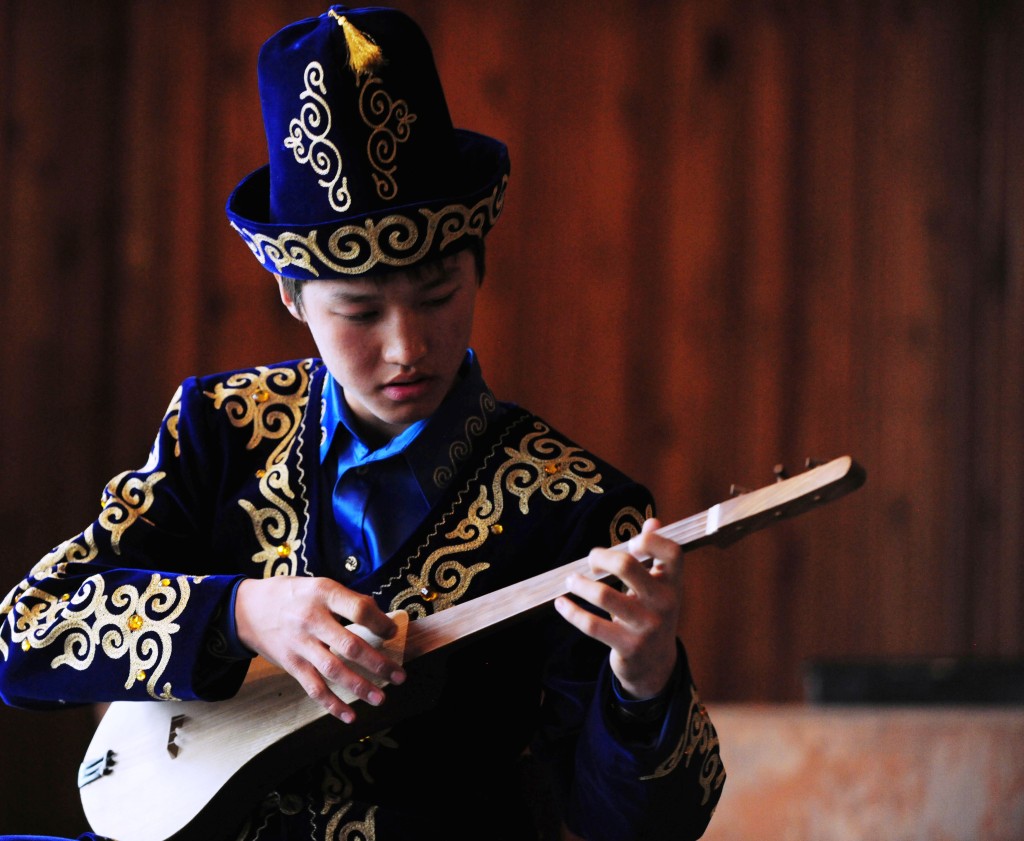 When you first started reading up on Kyrgyzstan, what did you find?  I’ll bet that as you read different travel forums about Kyrgyzstan or Kyrgyzstan travel blogs you were swamped with information about its beautiful mountain scenery or ancient nomadic culture. Those are both huge draws to this small country tucked away in scenic Central Asia! However, let’s dive into something a bit more unknown about this Silk Road country that you won’t necessarily find on a Kyrgyzstan travel forum or blog – the music of rural shepherds in Kyrgyzstan.

Due to the fact that Kyrgyzstan’s people come from a nomadic background, all Kyrgyzstan’s traditional instruments are lightweight, fairly small, and portable. They were meant to be played on the back of a horse to help pass the time as shepherds took care of their animals. 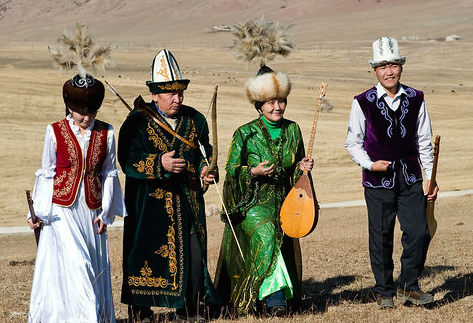 Nowadays travelers can see people playing these instruments if they plan to travel Kyrgyzstan via tours that focus on culture or trekking tours or bike tours in Kyrgyzstan that will put you in closer contact with nomads or villagers in the mountains. Here are some of the instruments you might see.

KYL KAYAK: CELLO ON A DIET

The kyl kayak is a 2-stringed instrument played vertically with the bottom resting on the musician’s lap.

Sound is produced by drawing a bow across the stings, not picking. The entire instrument is made out of a single piece of wood, the lower portion covered by camel leather. 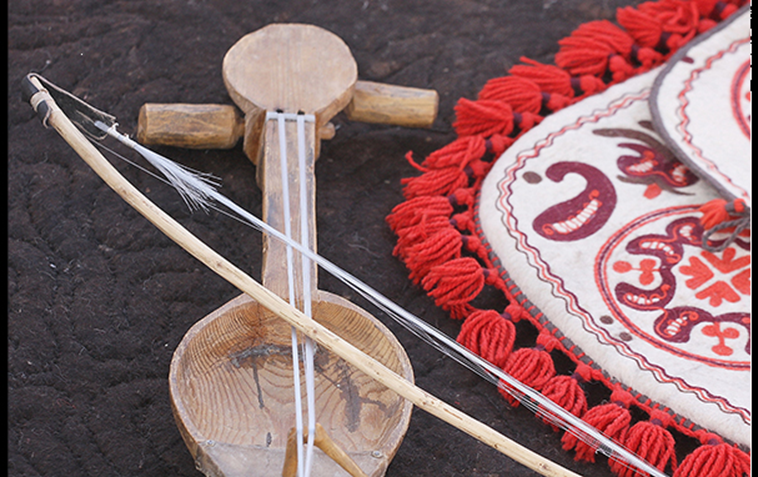 Nowadays, this instrument is not as popular as say, the guitar, amongst young people in the larger cities, but it is by no means extinct in the mountains. Your best bet for seeing a kyl kayak performance is during a folklore show on a cultural tour as you travel Kyrgyzstan.

The temir komuz is widely known by the name “jew’s harp” even though it has no historical connection to the Jewish people. The temir komuz is thought to have originally been from Asia and made of wood or bamboo and then made its way across the Silk Road until it reached Europe. This small 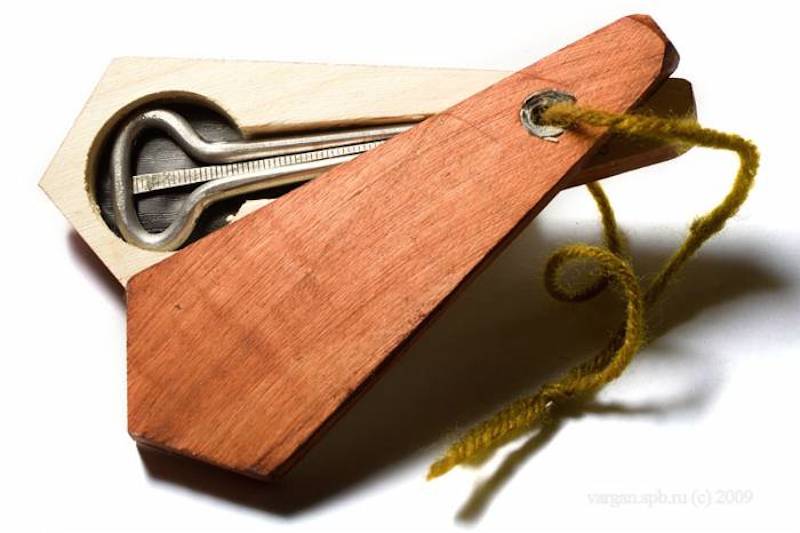 instrument is played by placing the prongs (as you can see in the picture) between the lips and plucking the steel plate. Different tones are produced by the prongs’ placement in the mouth and movement of the tongue. The resulting sound is incredibly twangy. In Kyrgyzstanit is said that by playing it to a sleeping baby, the baby will grow up to be extremely intelligent.

The chopo choor is a small, wind instrument made of clay played similarly to a recorder.   It is oblong with an approximate width of 8 cm and length of 20 cm played by blowing into one end and covering various holes in the clay to produce different notes. The chopo choor was originally a children’s toy wit 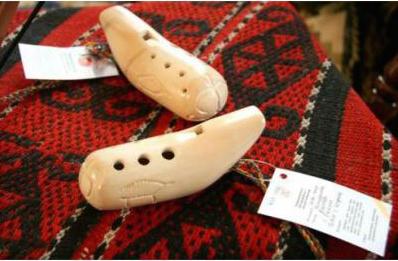 h just 1-2 holes that could produce 4-5 notes, but it has since evolved to include several holes to play a wider range of tones and melodies.

The komuz is the most common and iconic of all Kyrgyz instruments. It is a 3-stringed, fretless lute played horizontally like a guitar and plucked instead of played using a bow. The instrument is made out of a single piece of wood (usually juniper or apricot) with strings that were once made out of sheep intestine, but nowadays are made out of nylon. Virtuoso komuz players showcase their abilities by playing the komuz in many different positions: over their shoulder, upside down, etc.

If you are walking around Bishkek , do not be surprised to see young children 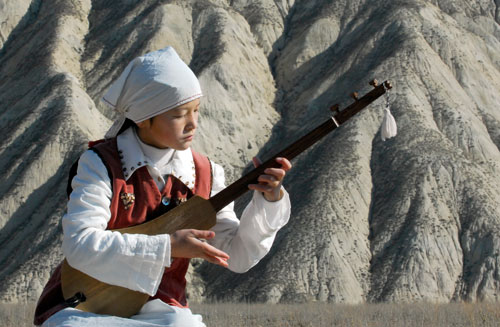 walking around with a komuz strapped to their back on their way to lessons. Of all the traditional Kyrgyz instruments, this one is the most common for people to learn. As far as hearing it played, it is possible to hear someone playing it if you are, for example, taking a bike tour in Kyrgyzstan’s mountains near small villages or Kyrgyzstan trekking tours that bring you into contact with nomadic shepherds. However, even though it is possible, there are no guarantees you will hear it just passing through these rural areas. For a sure-fire way to hear exceptional komuz-playing, sign up to travel Kyrgyzstan via a tour that includes traditional folklore shows in the mountains or attend a traditional folk concert at Bishkek’s Orchestra House.

SOAK IN THE MUSIC

All of these instruments can be played solo, but they can also be an accompaniment to singers. Kyrgyz singing is often quite nasal and notes are not always landed on cleanly, but danced around in an embellished style that is quite beautiful. Songs are often about love, the land, Kyrgyz life, or tell stories and provide a unique insight into the lives of people here. So as you travel around Kyrgyzstan, enjoy listening to the soundtrack of the Silk Road – the songs of shepherds.

From
$
The price depends on a group size. The price 3224 USD per person is available for groups of 4 people.
More info
6 days

From
$2910
The tour price is 2910 USD. The price doesn't depend on the amount of people in a group. The tour will be fulfilled even if only one person buy it.
More info
11 days

From
$2000
The tour price is 2000 USD. The price doesn't depend on the amount of people in a group. The tour will be fulfilled even if only one person buy it.
More info
10 days

From
$880
The price depends on a group size. The price 880 USD per person is available for groups of 2 people.
More info
10 days

From
1750 €
The price depends on a group size. The price 1750 EUR per person is available for groups of 6 people.
More info
Login
Signup
Forgot password?