Ancient monasteries on the shore of Sevan lake

In IX century monks moved to the Sevan island and started to live there. Religious complex Sevanavank was erected by hermit monks in the late 8th century with the support of Princess Mariam from the Royal family Bagratuni. At that time, the peninsula was not connected to the mainland and was  rocky area with a length of a little more than 250 meters and in order to get to the one needed to overcome 3 kilometers of water space. Nowadays, Sevanavank is one of the main attractions of a country. 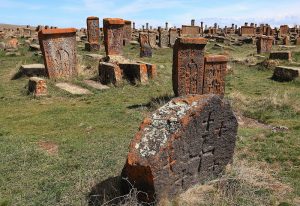 The second monastery on the shore of beautiful Sevan lake is Airavank monastery. The monastery was founded in the IX century and consists of churches, chapels, built in the X century, and the porch attached to the Church in the XII century. After a while on the East side of the Church was built chapels. Around the monastery there are number of tombstones and khachkars, which are part of the ancient cemetery.  The complex is located on a rock with astonishing view to the lake. The main entrance to the monastery is framed by a multitude of crosses, which have been applied to the monastery walls for hundreds of years. 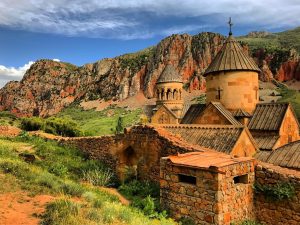 Not far from the Airavank monastery there is ancient Noraduz village (Noratus). In the 16th century, this village was the capital of the Armenian prinсipality. But it is famous primarily for its unique cemetery. According to the researchers, that the world’s largest collection of Armenian khachkars and, perhaps, the oldest Armenian cemetery are located here. A distinctive feature of most khachkars is a cross with a sun disk below it. The rest of the stone is decorated with different objects. Big amount of khackars in the cemetery dated back to the 13 -17th centuries, and the most ancient ones date back to fifth century. 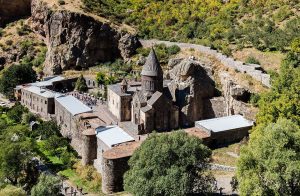 Noravank is one of the most interesting monasteries in Armenia. It is located 122 kilometers from the capital Yerevan and dates back to 13-14 centuries. Monastery complex is situated on the edge of the gorge. There are several ancient khachkars on its territory, as well as the Surb Astvatsatsin church, unique in its architecture, with narrow cantilever stairs. Noravank was also the residence of the Armenian princes Orbelyanov. The place is unusually beautiful as the neighborhood. Interesting fact about this place that an ancient footwear was found in the local red rocks, the oldest shoe that has survived to our times. If you are travelling to Noravank by car, you will probably want to stop and admire the beauty of these places.

The monastery of Geghard

This monastery is situated in a beautiful mountain gorge. Whether the mountains decorate the monastery, or, conversely, the creation of human hands adorned the mountains. Here is the whole beauty of Armenia. Geghard is a monastic complex, a unique architectural structure in the Kotayk region of Armenia. It is included by UNESCO into the list of World Cultural Heritage sites.

The main chapel was built in 1215 under the auspices of the brothers Zakare and Ivane Zakaryanov, the commanders of the Georgian queen Tamar. The courtyard, partly free-standing, partially carved into the rock, was built in 1225, and the churches were built in the middle of the XIII century.