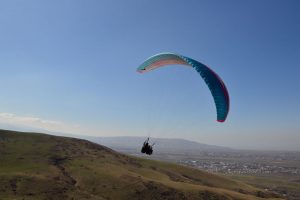 The question that runs in many tourists’ minds is, “What is paragliding.” Paragliding is the same as hang gliding, where the pilot is suspended from a framework that is similar to a canopy and the direction of flight is controlled by the pilot without a motor. The “wing” involved in paragliding are long, about 8-12 meters. They are made up of two layers of fabric which are detained together by an internal framework that gives it an aerodynamic shape and permits air to flow in and out of the wings. The pilot, who hangs securely in harness, is linked to the wings by a network of suspension lines.

It has two brakes that are controlled by the hands of the pilot, plus they held in. The presence of a “speed 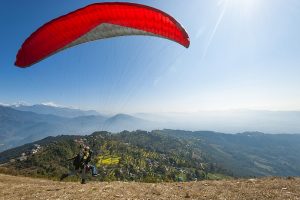 bar,” allows the pilot to vary the angle of the wings and thus control the craft. The pilot can use the technique of weight shifting to alter the direction of flight. The typical flight speed ranges from 12-75 km/hr. Novice glider that uses beginning wing cannot go at high speed and their speeds are expected to be slower. The gliders that are experienced attain very high speeds for an experience that is more extreme. I hope the “what is paragliding” question is now well answered.

Why paraglide in Central Asia

Weather: The climate in Central Asia is continental; therefore the winters are freezing, and the summers are hot. However, there is an 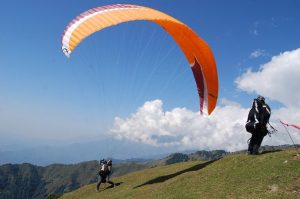 average of 245 sunny days in a calendar year, with very less rainfall thus making it perfect for paragliding.

The setting: it is an excellent place, where you can find a country like Kyrgyzstan that 90% of its land rippled in steep and snow-capped mountains. Central Asia boasts of the presence of many mountains including the two most popular ones known as Tien Shan and Pamir mountains. Since it is important to have the availability of heights and mountains cover, practically the mountainous sides of Central Asia are the playground for the paragliding adventures.

The presence of the numerous lakes, alongside thousands of rivers, hot springs, canyons, and glaciers makes paragliding a breathtaking experience.

We offer you tandem paraglider flights for those who want to fly with paragliding wing under the expert control of tandem pilot. Paragliding is the recreational and competitive adventure spo ...

From
$50
The tour price is 50 USD. The price doesn't depend on the amount of people in a group. The tour will be fulfilled even if only one person buy it.
More info
4 days

Ski and Snowboarding Vacations in Kyrgyzstan

We would like to invite you to a fascinating region located in the middle of Tien Shan. Largely unexplored mountains provide a wonderful playground for all kind of wild nature lovers. Kyrgyz ...

From
$2550
The price depends on a group size. The price 2550 USD per person is available for groups of 4 people.
More info
9 days