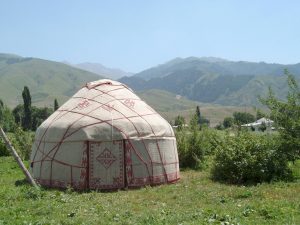 What is Yurt? Yurt is a symbol of Kyrgyz home. It is a portable house, which is easy to construct.  Even nowadays Kyrgyz people use yurts on holidays, weddings or funerals. Traditional house is very important for Kyrgyz people. Even the flag of the Kyrgyz Republic depicts a yurt.

The word “Yurt” came from the Turkic jurt. Initially it was translated as “people”, but later it became a home of nomads. No one knows when exactly the first yurts appeared.  Scientists and historians still can’t come to a consensus. There are two most common versions. The first version suggests that Yurts appeared in XII-IX century BC and were the houses of andronovs who lived in Ural, Siberia and Central Asia in the bronze age. But according to this versions their houses were similar 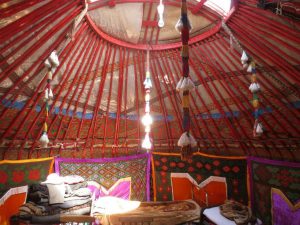 to log huts, that are different from Yurts that we have now. According to the second version houses of nomads who lived in the same area in the VIII-V centuries  are almost the same as today’s yurt. It is a well known fact that the yurts were used by the Kyrgyz, Huns, Turks, Mongols, Kazakhs and Turkmens, Karakalpaks, Altaians, Kalmyks, Nogais and Bashkirs.

Yurts have a round shape. Much is being said today about sacred meaning of the circle and significant division of the inner area. But all these reflections appeared much later than the usual form. Scientists say that the nomads who lived in the steppes, chose a round shape due to the fact that it has the least resistance to the wind, which blows constantly. This

shape of a home could stand in any hurricane. Later, physicists and builders have proved that the round building is also the most stable and much more capacious than quadrangular one.

Nomads lived in the yurts whole life. As a rule, they were constructed on the mountains, where they can feed the cattle and see the whole world. Yurts have been improved for centuries – all the components can be easily take apart . When nomads moved to a new place all parts of a yurt were hanged on a camels, horses or yaks. 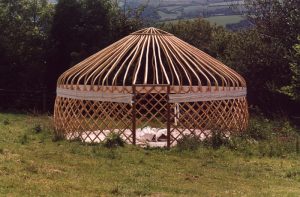 The Yurt has four parts that are not separated by walls. The place ,opposite to the entrance, called «tor» considered to be the most honorary. Here only guests and old men of the family take place. Usually there is always a chests in a yurt, where people fold blankets, pillows and fur clothes, which represents thewealth of the family. Place to the right of the entrance is considered to be a female part called «epchi jak», where women cook and keep all products and dishes. Place to the left of the entrance  is the male part called «er jak», where men hung livestock, horse and hunting equipment.

A good master can construct components of a Yurt in a month, but this traditional house will serve for hundred years. When it’s time to leave this world, a man spends a day before the burial in a yurt.

Thus, the Yurt is not just a house of the nomads, but also a great tradition of many nations. You will certainly experience it, when you first visit Kyrgyz Republic.

Ski your heart out in Kyrgyzstan's Tien Shan wilderness that is bursting with opportunities for great powder skiing.  Whether you are an experienced skier/rider or just starting out in the s ...

From
$2720
The tour price is 2720 USD. The price doesn't depend on the amount of people in a group. The tour will be fulfilled even if only one person buy it.
More info
1 day