Important tips you should know when travel Turkmenistan. Part 1. 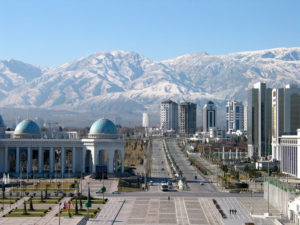 Turkmenistan is definitely worth to visit as traveling here you will discover such an alluring life: skullcaps and pilaf, Akhal-Teke horses, and colorful folk weddings, green tea, the famous carpets of dazzling beauty, the lightest silk and honey melon. Among other things, you can actually see that there is a cult of personality in Turkmenistan – difficult to believe that this is possible in the 21st century. You will see here a golden statue of the president, rotating to follow the sun, every morning a mandatory oath of allegiance to the “father of the Turkmen”! So now as before, Turkmenistan knows how to surprise us. The capital of Turkmenistan – Ashgabat. Major cities – Turkmenabat, Dashoguz, Mary, Balkanabat, Turkmenbashi.

Turkmenistan Customs. Import and export of local currency is prohibited. 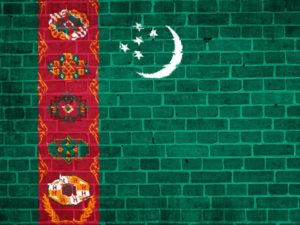 Import of foreign currency is allowed in unlimited quantities, the declaration is required; export – no more than the declared amount at the entrance. Duty-free import of 200 cigarettes or 200 grams of tobacco, 2 liters of any alcoholic beverages, personal items within the individual needs. The export of antiques and works of art is possible only with the permission of the Ministry of Culture; carpets and jewelery – with proof of their lawful acquisition.

Money and currency exchange. Monetary unit – Turkmen manat (TMT). In Turkmenistan it is better to bring cash, though it will not be difficult to find ATMs working with the international cards MasterCard in the capital (but in other regions of the country – it is already problematic). You can cash money from Visa card round-the-clock from ATMs of Vnesh Econom Bank. When exchanging currency preference is given for dollars; it is desirable to take a 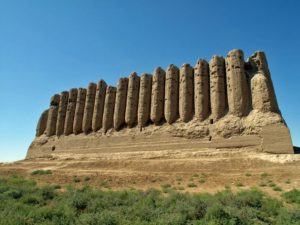 large number of small dollar bills. You can exchange money in banks (most open Monday to Friday from 9:30 to 17:30, a lot of exchange offices at banks are open around the clock), in hotels and in the official exchange points. Recent accept only “fresh” the latest release notes and series without scuffs and inscriptions. There are also street money changers, and their course is usually significantly more favorable to the official, but you can communicate with them only at your own risk. By credit card it is possible to pay only in several prestigious hotels and restaurants in Ashgabat, as well as in the offices of the airlines, in the rest of the country payment is accepted only in cash. Travellers checks can be cashed only in few banks, preference is given to US dollar.

Safety of tourists. While traveling in Turkmenistan, tourists should follow standard precautions: keep documents and valuables in the hotel safe, not to 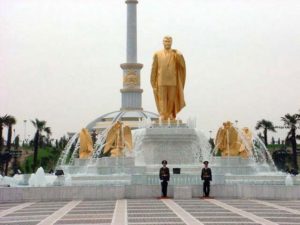 bring large amounts of money and always keep an eye on bags and purses. In crowded places – on the markets and bazaars to watch out for pickpockets. At night, it is better not to walk alone, especially in unfamiliar areas. A trip into the border areas of the country is possible only at the official permission and with the Turkmen assistant.

In conversations, do not touch the theme of policies and contradictory epoch of Saparmurat Niyazov, as well as all somehow connected with it: from the artistic value of the book “Ruhnama” to the golden statues of the “father of the Turkmen” in the main square of Ashgabat. The state religion of Turkmenistan is Islam, therefore it is necessary to respect the norms of Islamic morality and not to dress provocatively. Drink only bottled or boiled water, use it to wash fruits and vegetables and to brush 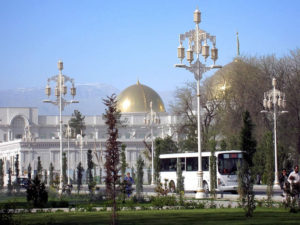 teeth. In the bars and restaurants it is advised to order pre-chilled drinks and abandon edible ice.

The climate of Turkmenistan. Turkmenistan – the hottest country in Central Asia. In July and August in Ashgabat temperatures can reach +50 ° C. In the country dominates sharp continental dry climate with constantly blowing northerly winds that bring in winter from the steppes of Kazakhstan  the cold air and in summer – heat, sandstorms and winds. The average January temperature in the southern regions – +4 ° C, in the north – -5 ° C, in Karakum desert – right up to -25 …- 30 ° C. In July, in the south of Turkmenistan thermometer on average kept at around +35 ° C, in the north – +27 ° C, in the desert regions the temperature reaches +50 ° C during the day and +14 … + 17 ° C at night. In the Caspian lowlands the climate is mild, quite comfortable in both summer and winter. The best time to visit the country – from April to June and from September to early November.