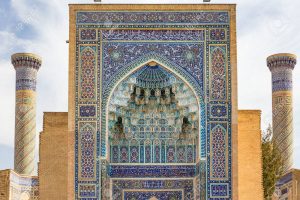 The most legends among buildings, by my opinion, are attributed to saint places. That is why in that article we will dive into the legends of mausoleums in Uzbekistan, in Samarkand exactly. It is a must-visity places not only because of the interesting rumors related to them, but also because of their beautiful and outstanding architecture.

Gur-e-Amir mausoleum was built under the directive of Mohammed Sultan in the south-western part of Samarkand. It was initially built as an educational place where Islamic 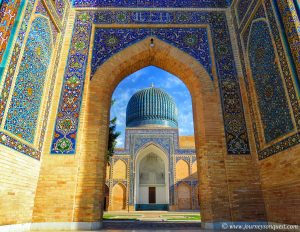 knowledge could be taught. Madrasa (institution for giving education) was not big in size and accepted kids from Samarkand’s noble families. In the opposite of it,  ribat (or ‘khanqah’, a miniature fortification that served for Muslim people as housing etc.) was built. Sudden death of Mohammed in 1403 lead to changing the purpose of the building usage: Amir Timur was very sad about the death of his lovely grandson and decided to change the construction of the madrasa in a way of building a mausoleum in the southern part of it, where he put the remains of his grandchild. Tamirlan (Amir Timur) did not see the final version of the mausoleum, as he died 2 years after Mohammed and his another grandson, Ulugbek, finished the construction supervision and Gur-e-Amir became the place of burial of Amir Timur as well as of himself and their descendants. The dome and walls of the mausoleum are covered with light and dark 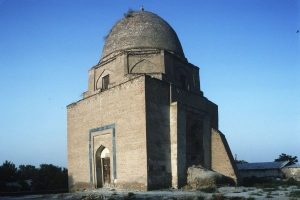 blue bricks, gilding and murals. The dome reminds of a sky full of stars. Today Gur-e-Amir mausoleum is renewed while madrasa and ribat are in ruins. Interesting legend is also related to the Timurid’s tomb in the building: Russian expedition decided to open the tombs in order to check whether it is really Amir Timur’s and his descendants’ remains. When they opened the tomb of Tamirlan, the terrible smell filled the whole room that made it difficult to breath. However, investigators relate that smell to the tradition of embalmment of dead in the past. Another ‘curse’ that fell on the Russian investigators and the world as a whole is that right after the excavations , to be exact 2 days after it, Nazi Germani attacked USSR without any warnings starting the crime against humanity. 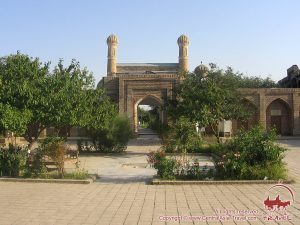 Rukhabad mausoleum is one of the oldest Samarkand’s monuments, the so called ‘tenement of the soul’. The monument, as previous one, also belongs to Amir Timur’s time of rule. The mausoleum was built in 1380 under the Burhaneddin Sagaradzhi’s burial site. Burhaneddin was a sheikh and a famous scientist. The marble road that is protected by trees from the sun from both of its sides leads to his tomb. The building was well-known in Tamirlan’s life time, Amir Timur himself often visited it and always got off his horse when he was there. Later he even ordered to build a spiritual centre consisting of madrasa and khanqah near the mausoleum, and  that centre was connected to the Sagaradzhi’s tomb by the ‘royal road’(Shakh-Rokh). The legend envelops that mausoleum as well: Burhaneddin, according to the legend, had a copper box with seven hair fibers from the beard of prophet Muhammad and that was sealed during the construction of the mausoleum. The relatives of Burhaneddin were also buried there. In the middle of the 19th century madrasa and minaret were built near, and also the swimming pool was opened there, they were renewed and are that is how they are present nowadays along with the mausoleum. The mausoleum was atypical for its time: it was one-domed, with a concentric composition with the area of 14×12 meters and height of 24 meters, the base of the building is cube, and it has three entrances – from north, west and south, the facade is recognizable by old burnt bricks in its decoration . It is located near to Gur-e-Amir mausoleum.