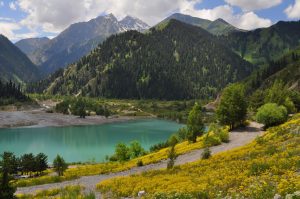 When travelling to Kazakhstan, you might frequently ask yourself, what to eat and how to eat just like locals, o let’s get today more into the local Kazakh cuisine and meet the country through food.

They love it very much, actually the consume per person is 1.5kg of tea per year, it’s a whole ritual, where the tea is drunk from small cups called pialok (they are not having any handles) and with milk. On average, one person can easily drink 5-6 cups of tea a day. 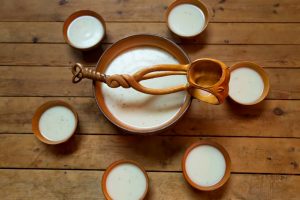 In Kazakhstan you can taste three very specific milk drinks, they are as following: koumiss (fermented mare’s milk, with medical properties),airan (fermented milk diluted with water, drunk as a refreshment), katyk (sour milk, very similar to Russian kefir). All these drinks might seem extremely strange and exotic, but all of them are worth trying and taste like heaven.

Kazakhstan is the heaven for meat lovers 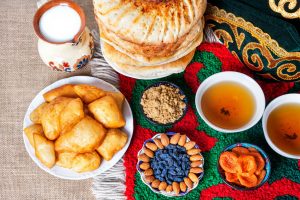 Meat is everywhere, it’s the main ingredient both for appetizers and main courses. For example, one of the most traditional and loved appetizers, Sorpa, is basically a strong broth of any meat, with various fillings. Another Appetizer can be considered Kespe which is basically a home-made noodles boiled in beeth broth with chunks of meat and onions, it is usually served with cottage cheese and herbs.
For Main course is often made Beshbarmak, it’s pieces of dough boiled in lamb broth. The name means “five fingers”, because it’s eaten with hands and is very dramatic, as on a separate dish is served the ram’s head, a special gift for the most honoured guest. 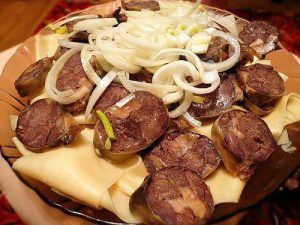 The two main delicacies of the Kazakh cuisine are Kazy and Shuzhuk. The first one, Kazy, is a traditional sausage from horse meat, that is cut from ribs and rubbed in salt, pepper and garlic, then fold in the washed intestine, boiled and cooled. The second one, Shuzhuk, is extremely similar to Kazy, the only difference between them being the fact that the meat for this type of sausage is cut into pieces and is kept in the mixture for several days before boiling.

They have a Nauryz dish 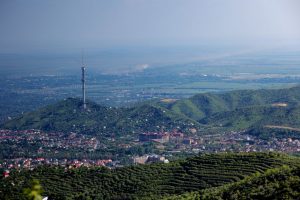 On March 22, during the vernal equinox, in Kazakhstan is celebrated Nauryz, a specific holiday for this country, which is considered the beginning of the year. Especially for this day of the year, the chefs prepare a special dish which is called “Nauryz skin” There are two principles for its cooking: it is prepared from 7 ingredients – water, dried or dried meat, salt, butter or fat, cereals, yogurt; and always in a dish put seven kinds of cereal (usually – rice, barley, oats, buckwheat, corn, millet, wheat), and seasoned necessarily something sour milk (eg, ayran or katyk, in our opinion, kefir) . Usually it is served as a soup, but it can be prepared as a second course, adding to the pieces of cooked meat, or kazy shuzhuk).

But don’t forget that it’s much easier to enjoy these meals on a tour with SilkRoadExplore.com

From
$1125
Price from 1125 USD to 1475 USD per person (the price depends on a group size). The price 1125 USD per person is available for groups of 8 people.
More info
Login
Signup
Forgot password?