Historical buildings of Kashgar will show you how the caravans of the Great Silk Route rested and lived here. For several centuries the architecture style has built up and it is not easy to distinguish an eight-century inn from what was built in the 14th century. This is a unique architecture, in which the features of the decor, inherent in Chinese houses are inscribed.

Old Town – This is a typical Uighur district. Houses here are low – 2-3 floors, made of clay, often with courtyards. Almost always the first floor is occupied by a shop or workshop. The

streets are narrow, so that walls of houses cast a shadow on each other and on passers-by, on the squares there are spreading trees, under which old people rest, listening to birds, sipping tea and playing chess, dominoes and cards. Almost all historical sites are located in Old Town.

Id Kah. It is the largest mosque in China, built in 1442, although the age of the foundation is much older. It was significantly expanded and rebuilt since it was first constructed. He mosque is located on the central square of Kashgar. It has an area of 16,800 m² and houses up to 20,000 worshipers. Muslim

mosques in China are distinguished by their gardens. For several centuries, gardeners have collected here the collections of the rarest, beautiful and fragrant plants and trees. The courtyard is surrounded by porticoes with a colonnade, where you can escape from the heat. In front of the entrance to the prayer hall there is a pool with water so that people can wash and refresh themselves. And, of course, there are shelves for shoes, because you can only enter bare feet. The mosque is oriented so that the breeze blows through its hall, creating comfort for those who came here to pray. Islam prohibits the depiction of animals and 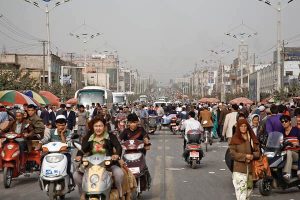 people in sacred places, so Muslim carvers in stone and wood, clerks and artists have developed a special style of the pattern, based on geometric figures and calligraphic inscriptions. Three minarets like candles stick out above the main building and call for pray at a certain hour. From the mosque, you get to the streets with multiple shops: fabrics, carpets, tiles, ceramics, jugs of copper and porcelain vases, string and wind musical instruments, clothes, spices, tea, sweets – everything can be bought here.

Mausoleum of Yusuf Khas Khadjib is among the most frequently visited y pilgrims Muslim holy places in Kashgar and is one of the main tourist attractions of the Old Town. The mausoleum has traditional for Central Asia 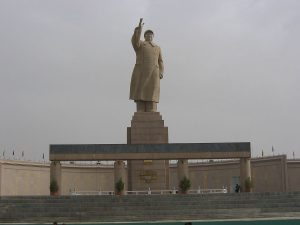 architecture and has a square shape with a dome and a mosque. Flower and geometric ornament decorates its surface, the dome shines with turquoise. Yusuf Khas Khadjib – a significant figure in the pantheon of Muslim thinkers – lived in Kashgar in the 9th century and served in the retinue of the local aristocrat Arslan Khan. His main work is a collection of sayings called “Blessed knowledge”. This book is one of the first monuments in the ancient Uighur language and is especially revered by local residents.

Another mausoleum of Abah Khoja is revered as a shrine of the Uighur people. In its walls lie the remains of five generations of outstanding families of the city. The building is 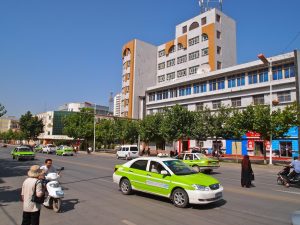 considered a masterpiece of local architecture, but differs from the mausoleum of Yusuf by its ascetic interior. Here one can feel the influence of the philosophy of the Sufis, whose views were shared by Abah Khoja. But around a large park with bathing pools and ponds, mosques, a spiritual school and a Muslim cemetery. To prevent tourists from interfering with religious pilgrims, part of the garden is closed to public. Here, in the mausoleum, is also a place of burrial of Iparkhan, the concubine of the Chinese Emperor Qianlong, the Qin dynasty. Her fate is widely known, and she was one of the cult figures of the Uighur culture.

Kashgar Regional Museum. It was founded in 1992. The main exposition is the Silk Road in 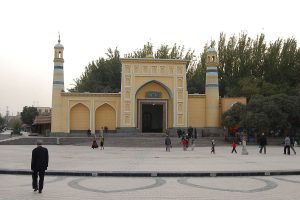 Xinjiang and historical relics. The historical artifacts of the Han, Tang, Sun, Yuan, Ming and Qing epochs and much more are gathered here to show the history of the Great Silk Route and its heritage.

Gaotai is another very popular place for tourists in Kashgar, located нon the hillside. This district is historically populated by Artisans, whose families live in their homes here for several generations. Workshops and shops are also located right there. You can see how to burn metal in the furnace to make a casting, like ringing mallets draw and round a sheet of copper, then the master welds a spout to it and it turns a jug. Another master cuts the metal with a thin cutter. Here knives, sabers and daggers are forged, they also make a sheath for them. Joiners inlay mother of pearl chests and tables of walnut and decorate with inserts from the road tree wood. In the ceramic workshop the potter rotates a circle with his foot and clod of clay, swinging, turns into a dish. From wood of a peach and an apricot craftsmen make unique pipes and flutes. Brooks run down streams in the irrigation canals, and local tea-houses and restaurants stand on stilts over ponds to make the visitors cool even in the midday heat. This quarter of masters is the best place to get acquainted with the culture and life of the Uighur people.

We are sure that you will enjoy greatly your travel to Chinese Kashgar , you will learn, experience and discover much new about this magic corner of the world!

This trek starts in the At Jailoo Gorge, an amazingly beautiful place, and ends at South Inylchek Base Camp, taking approximately 1 week. From the base camp you'll get stunning views of Nans ...

From
$2540
The tour price is 2540 USD. The price doesn't depend on the amount of people in a group. The tour will be fulfilled even if only one person buy it.
More info
22 days

From
$2720
The tour price is 2720 USD. The price doesn't depend on the amount of people in a group. The tour will be fulfilled even if only one person buy it.
More info
8 days