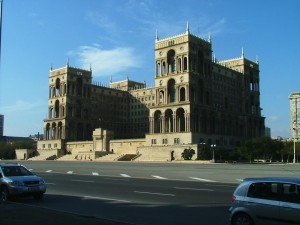 Ganja is a very valuable destination for tourists as the famous Great Silk Route passed through this city. Today the city is involved in the project for the restoration of this ancient trade route.

Getting there. Ganja can be reached by plane, train, bus or own transport. From Baku, capital of Azerbaijan, to Ganja – 370 kilometers, by bus it will take about 4 hours. Ticket price – 8-10 AZN. Drivers usually do a half-hour stop at a roadside cafe so that passengers can relax and dine.

Ganja Airport. Few years ago Ganja airport received international status. It is located approximately 10 kilometers from the city. To get to and from the airport is possible by taxi. 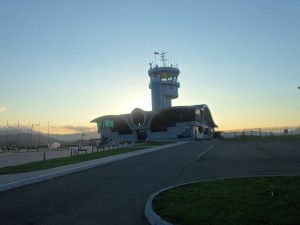 Transport. The most developed form of public transport in Ganja – a bus. Their routes run through the whole city. The fare is small – 0,25 AZN. Also in town there are mini buses and a couple of years ago in Ganja were started electric vehicles to travel around the city. However, this is not the kind of mass transport, rather as an example of environmental care.

With taxi drivers in Ganja the fare must be negotiated in advance. On average, a trip within the city will cost 2 AZN.

Cuisine and restaurants. In Ganja there are many places where you can spend a delicious time with your friends, where they serve national cuisine. Usually,  it is a small quiet cafe, where 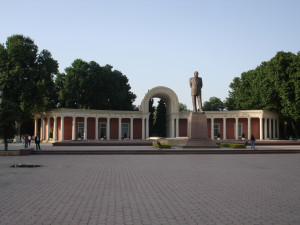 locals can relax after work. Everybody should try dishes of Azerbaijan cuisine here as Ganja chefs are among the best in Azerbaijan.

Shops. For tourists, first of all, will be interesting the souvenir shops of Ganja. Small shops offer sets, trays, vases. In the 70s of the last century, the city opened a porcelain factory. Since then its products are actively promoted among the visitors. Porcelain products are painted in Azerbaijani style, exquisite paintings tell about the history of the republic and national heroes.

Also in the city you can buy excellent carpets and silk scarves, engraved glassware, jewelry, and, of course, wine. Azerbaijani wine tastes as delicious as Georgian. 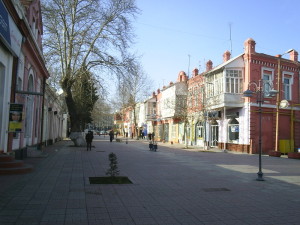 Hotels. We can not say that the hotel industry is well developed in Ganja. As in any city, you can stay in a good hotel or rent an apartment for a day or a few hours.

The most famous hotels of the city are “Ganja” and a five-star Ramada Plaza. The first hotel is located in the central part, in rooms there is a shower, air conditioning, television. It is also possible to rent a meeting room and a business center.

Accommodation in the Ramada Plaza will cost 70-140$ per night. For that amount, you can get a great double room, as well as the opportunity to visit a sauna, fitness center, swim in an open swimming pool and a tennis court.

Guided tours, entertainment and attractions of Ganja. Ganja – one of the most beautiful cities of Azerbaijan. There is the ancient landmarks, and a 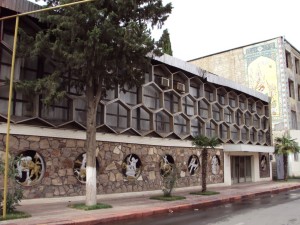 relatively young, reflecting the recent history of the country.

The main historical ensemble is an ensemble of Ganja Sheikh Bahauddin, which includes the Juma mosque, a caravanserai and Chokyak-hamam. The first in this trinity appeared Mosque (1606), followed by a bath with two halls, and after a caravanserai, where today there is a museum of poet Meskheti Ganjavi.

Juma Mosque. Architect of Juma mosque Sheikh Bahauddin was an astronomer by vocation. During the construction of this unique building of red brick, he came up with a trick: he built it so that it is possible to synchronize watches. At noon on the west side on 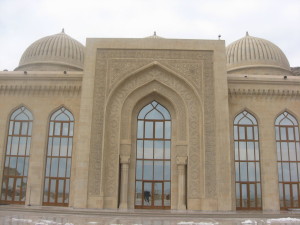 the white brick falls a ray of sunshine, so then you can customize your ticking mechanisms.

Javad Khan Tomb. Javad Khan Tomb was opened as a monument in 2005 in honor of the fearless warrior who was killed during the capture of Ganja by Russian troops at the beginning of the 19th century. This tomb is set on the site of the grave of Javad Khan and is performed in the style of medieval architecture school.

Russian church. At the end of the 19th century Russian church was opened in Ganja. Temple appeared on the site of the cemetery, and for its construction were granted money by both Orthodox and Muslims. In the interior of the church there are the icon of Alexander Nevsky and the icon of St. Mary Magdalene.