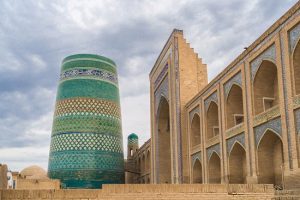 Like the other ancient cities of Uzbekistan Khiva also has its own fascinating history and unique architectural monuments. There is a legend about the foundation of Khiva in Central Asia. According to the ancient legend, Sim son of Noah founded the city in the form of a ship on quite rich land that he met on his way. Then he ordered to dig a well, water from which had exquisite taste.

The first information about the city was found in ancient written sources of the 10th century. The description of the city is given too concisely, it says only that the city was situated on the caravan route between the states of Merv and Urgench. Such a favorable geographical location made Khiva an 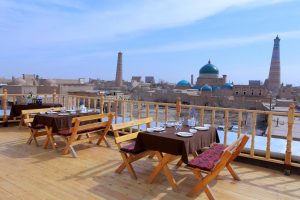 important trading point.  Over the centuries Khiva survived countless wars and conquest. It had undergone numerous invasions and destructive campaigns of medieval conquerors, that destroyed the city, after which it took a long time to restore it. Many architectural monuments have not survived to our times, leaving only dust in the vast history. The city of Khiva, in spite of all destruction, endured and recovered.  If you have decided to visit Khiva city, below we present you information about its major highlights. 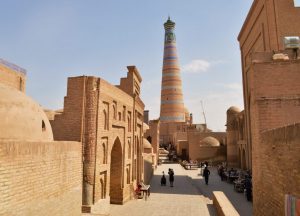 Kala”.  In Ichan kala are concentrated main architectural masterpieces under the protection of UNESCO. It is a real open air museum, where almost every single building has own fascinating legends. Furthermore, Khiva and Silk Road are closely connected, at that time the city was one of the main trading points.

Kunya-Ark citadel reminds a small city in Ichan Kala. Until 1920, Kunya-Ark was the Khan’s residence. The citadel was built at the end of the 17th and by the end of the 18th century, it was separated from Ichan Kala by the fortress wall, as a result of which it became a “city within a city”. The fortress consisted of a harem, a reception hall, two mosques, a mint and storage rooms. The square at the entrance to the citadel served as the venue for parades and military training. Nowadays, only a 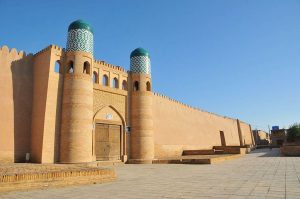 few buildings of the Kunya-Ark territory have been preserved.

Kalta Minor is a minaret that stands at the main facade of the Muhammad Amin Khan madrasah. The name “Kalta” comes from the word “short.” It was supposed to be the highest minaret in Central Asia, with a height of 70 meters, but after the death of Muhammad-Amin-Khan, the process construction of the minaret was interrupted, stopping at a height of only 26 meters. This bright blue minaret has no analogues in Central Asia.

The other major highlight of the city is covered bazaar and the caravanserai of Alla Kuli Khan, which nowadays look like a single structure. In the 19th century, due to  the expansion of trade with the neighboring countries and cities, new trade areas were required. The main bazaars were located at the gates of Palvan-Darvazy, therefore in the 30s of the 19th century Alla-Kuli-khan constructed a huge caravanserai. It worked as a hotel for merchants.

Besides the above-mentioned attractions, there are much more historical monuments on the territory of Khiva. The best way to explore the country is to take Uzbekistan guided tours with excursion, that will give you complete information about its history and traditions. Our company works to make your travel in Uzbekistan convenient and unforgettable. Contact us for more information.

From
$
The price depends on a group size.
More info
19 days

For thousands of years the Great Silk Road was connecting China to the Mediterranean and facilitating cultural exchange between two major civilizations of that time - the Eastern and the Wes ...