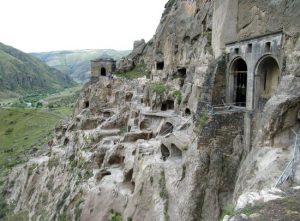 Nowadays, Georgia is one of the most famous places among the people from Europe and USA. It attracts tourists with pristine nature, ancient cities and centuries old history. If you are planning to visit Georgia, the first thing you should know is to be ready and let the country to enchant you. This is the special place that you cannot forget and want to return again and again. So, let’s talk about its unique historical sights.

Vardzia is the famous cave city in south part of  Georgia, near the borders with Turkey and Armenia. Georgians are very proud of their cave cities. Vardzia is quite a popular tourist 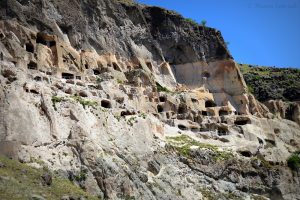 place, along with other cave complexes: Uplistsikhe and David Gareji. The first one is closer to the capital and therefore tourist visit it more often, but you have to visit Vardzia, especially if you are traveling somewhere in the Borjomi area. On the left bank of the Kura, about 600 rooms are carved into the tuff rock, including living quarters, warehouses, churches and even baths. The most important and central part of Vardzia is a temple in honor of Uspenija of the Virgin with unique frescoes of the 12th century.

The cave city itself was built at the turn of the 11th and 12th centuries by King George III, and then his daughter, Queen Tamara. Firstly, the temple was built, and then next to it cells for monks and other business 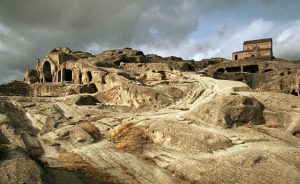 premises were carved. First you need to buy a ticket at the box office and go up the road to the collapsed bell tower. From here begins the city itself. You can even see the remains of irrigation system. But the most interesting is the secret passages, tunnels, hidden rooms. Here you can walk for a long time on all these stone labyrinths, making your way along narrow aisles or going down a steep metal staircase, that leads nowhere. 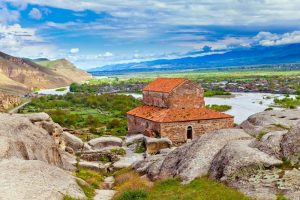 Uplistsikhe is a cave town near the Gori city. These two places are usually visited at the same time, since they are only 12 km away from each other. The cave city appeared at the beginning of 1 thousand BC on the right bankof the Kura and experienced many epochs and generations. This is a cut from the remnants of architectural and religious buildings built over thousands of years. Wind-caverned niches, sacred images, horrific prisons (stone bags up to 8 m deep) – everything is amazing here. At first, the inhabitants of the city were pagans; after they were opposed to the early Christians, they survived invasions of Alexander the Great’s troops. And even controlled the Silk Road in Europe!

The ancient people did not just choose this place to build a city: the rocks are a natural fortification, inaccessible to enemies. Uplistsikhe was originally a religious building, where they worshiped a female deity, whose symbol was the wheel. Gradually, people mastered these places – dwellings, temples, outbuildings were carved into the rock, and the slope on the mountain was plowed up and Uplistsikhe became a city. During blossoming, Uplistsikhe included more than 700 caves and cave structures, however only 150 are preserved till our days.

If you want to learn more about the history while discovering cave cities it is better to take at least audioguide that can help you to learn about the historical importance of such kind of unique structures.