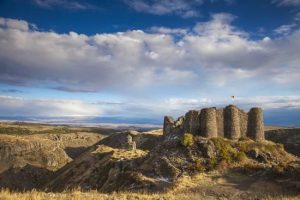 One of the masterpieces of medieval Armenian defensive structures is Amberd fortress. This defense structure was built at an altitude of 2300 meters with deep cliffs and ravines on both sides. The inner part of the fortress, which includes a church temple, was built at the beginning of the 11th century by Prince Wagram Pahlavuni. The fortress occupies a cape formed by the confluence of the Amberd and Arkhashyan rivers. The local gorges are very deep (about 100 meters), sheer walls in some areas reach a height of 50 meters.However, from individual positions, the castle grounds were still vulnerable, and therefore it was necessary to erect a fortress wall 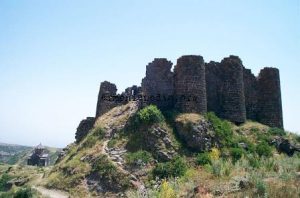 protecting the palace. In addition to the palace and the fortress, the Amberd defense complex included a partially preserved church and a chapel on a rocky ledge.

For four centuries, Amberd was owned by representatives of several Armenian princely families who fought against the Seljuks. In the XIII century, the castle was captured by the Mongol-Tatars and set on fire. Traces of the strongest fire are still visible. At the end of the XIV century, in the period of the capture of the country by Timur, Amberd finally fell.

The Fortress is located in 50 kilometers from Erevan city. There are a lot of tours from the

capital, so you will be able to join the group or take an individual tour. It is not so popular sight of Armenia, however offers spectacular views and fascinating history.

In the Garni town (Armenia), located on the edge of a fantastically beautiful mountain gorge, at the bottom of which the fast Azat river has been making its way for thousands of years, there is an extraordinary monument of Armenian history — a real Hellenistic temple. Strict ionic columns, surprisingly precise proportions, symmetry, rich ornament on the stone. It seems surprising that this pagan 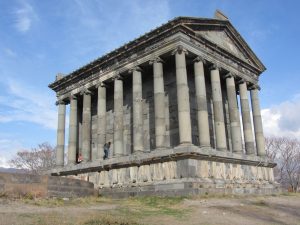 temple stands on the territory of Armenia — the country that was the first in the world to adopt officially Christianity as a state religion.

Among the thousands of attractions not only in Armenia, but throughout the Caucasus ancient Armenian temple Garni stands out and appearance and history. It seems that suddenly you are transferred from Armenia to Greece or Italy to some ancient monument. For a few thousand kilometers in the area there is nothing like. The temple of the Sun God Mithra is a monument of world importance. It was built almost two thousand years ago, in the second half of the first century AD. As a result of a strong earthquake in 1679, the temple was almost completely destroyed, but in 1966-1976, thanks to the great efforts of historians and architects, the temple was restored. More than 80% of the stones here are original. The style in which the temple is built has a direct connection with Rome. In the first century AD, Tiridate I of the rules here — the King of Armenia, brother of the King Parthia Vologina I. Between Rome and Parthia broke out the war, which went with varying success. As a result, a peace Treaty was signed, according to which the Tiridate received the Armenian Kingdom as a vassal of Rome, and was crowned by Nero in Rome. Nero even gave him masters, with the help of which was restored the ancient capital of Armenia – the city of Artashat and, obviously, the Palace and the temple in Garni.

From
$
The price depends on a group size.
More info
9 days

Armenia can offer a lot of interesting things to its guests. During this 9 day tour you can see the most interesting historical sites, numerous monasteries and temples, spectacular scenery, ...

This tour is an interesting mixture of culture and adventure. It includes trekking, riding, hiking and culture. So we will explore the culture of Armenia by adventures.

This unique tour is created especially for women. Enjoyable holidays in sunny Armenia along with visits to great historical, architectural and natural sights offer such exciting activities a ...

Armenia is a country which has a very tasty cuisine. And it has become a part of everyday life and culture. Armenian cuisine is very rich in delicios unique meals and dinks. This tour is des ...

Our new offer of 7-day excursion tour in Armenia is a great possibility to discover the impressive historical, architectural, cultural heritage of this Caucasian country. Every day will b ...