6 Popular Destinations in the Tien Shan Mountains of Kyrgyzstan 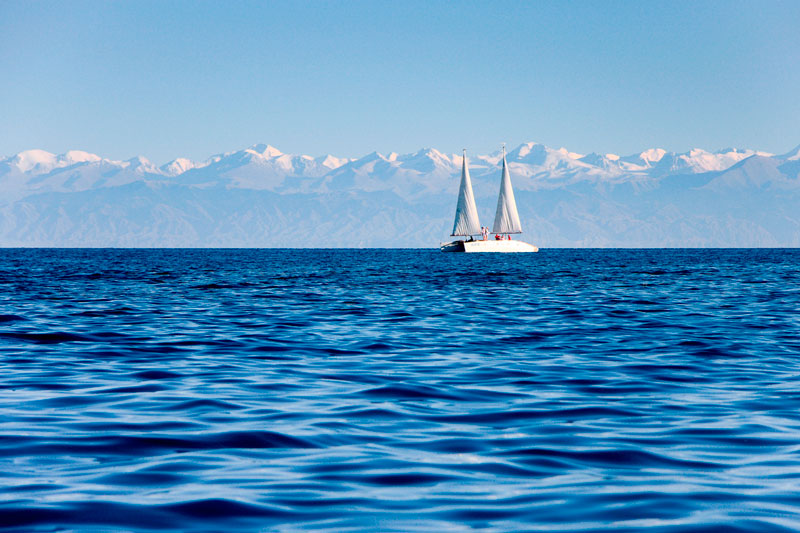 The Central Asian country of Kyrgyzstan is home to one of the world’s most spectacular mountain systems, the Tien Shan Mountains.  The Tian Shan Mountains are known as “celestial mountains.”  Their peaks roll on endlessly through the entire country topped with snow and their mountainsides are clothed in green grass, all against a bright blue backdrop.  Herds of sheep, horses, goats, cows, and yaks wander over their high mountain pastures, randomly dotting the rich landscape.  However, the trademark of the Tienshan is the ever-moving, snow-white clouds and mysterious mists that hug the mountain peaks, giving them an Olympus-like atmosphere.

If you look at a Tian Shan map, you’ll see that this system is actually the largest in Asia.  It stretches on for a length of 2,800 kilometers with the widest section measuring at 800

kilometers.  Within the Tien Shan System are over 88 major mountain ranges and 40 peaks that are over 6,000 meters tall.  While it extends over several different countries, you can find most of the Tien Shan Mountains in the Kyrgyz Republic.

Tian Shan tours in Kyrgyzstan are some of the most breathtaking mountain tours in all of Asia.  While the big picture view of the Tian Shan Mountains is a sight to behold, the Tienshan also hold glorious pockets of raw natural beauty.  Here are 6 unforgettable Tien Shan travel destinations that international travelers are sure to want to take advantage of in Kyrgyzstan:

Lake Issyk Kul is the largest alpine lake in Kyrgyzstan and the second largest alpine lake in the world (6,236 sq km).  Lake Issyk Kul is by far the most popular Tien Shan travel destination in Kyrgyzstan.  It has crystal clear waters, plenty of nearby resorts, boat rentals and water sports, and to top it all off, is surrounded by snowcapped peaks.

Lake Ala Kul is hidden away at a height of 3,532 meters in the Terskey Ala Too Mountain Range of the Tien Shan.  Its waters look abnormally blue against rocky, snow laden ridges.  The lake itself is small, just 1.5 square kilometers, but rests in between the ridges as a gorgeous decoration in the already spectacular range, a popular destination when trekking Tien Shan Mountains in Kyrgyzstan.

The Barskoon Gorge is a 30 kilometer long gorge that lies along Lake Issyk Kul’s southern shore.  It’s covered in spruce and juniper trees, thick grass, and houses numerous waterfalls.  For those interested in some Tien Shan trekking, the Barskoon Gorge is a popular trekking destination, especially for its waterfalls which draw in travelers from all over Kyrgyzstan. They are especially beautiful in the winter when they freeze in place.

Peak Boris Eltsin stands 5,168 meters tall in the midst of the Terskey Ala Too Range.  This peak is excellent for amateur alpinists and trekkers looking to challenge themselves as well as soak in the beautiful mountain scenery.

When looking at a Tien Shan Mountains map, you’ll inevitably see Peak Khan Tengri marked as one of the highest peaks in the range.  Peak Khan Tengri sits at 7,010 meters and resembles a massive marble pyramid.  When the sun sets, Khan Tengri glows red, earning the name “Kan Tau” from its Kazakh neighbors, meaning “blood mountain.” It’s a stunning sight to behold.

The Tian Shan Mountains in Kyrgyzstan are filled with beauty, potential, and adventure for the international traveler.   Those interested in Tien Shan tours in Kyrgyzstan should be aware that Kyrgyzstan has recently gone visa free for citizens of 44 countries including the USA, Canada, and most of the European Union, so access to the country is extremely easy.  Enter Kyrgyzstan hassle-free and see for yourself why the Tien Shan Mountains are considered one of the most beautiful mountain systems in the world!

From
$1980
The tour price is 1980 USD. The price doesn't depend on the amount of people in a group. The tour will be fulfilled even if only one person buy it.
More info
11 days

From
$1480
The price depends on a group size. The price 1480 USD per person is available for groups of 3-10 people.
More info
Login
Signup
Forgot password?