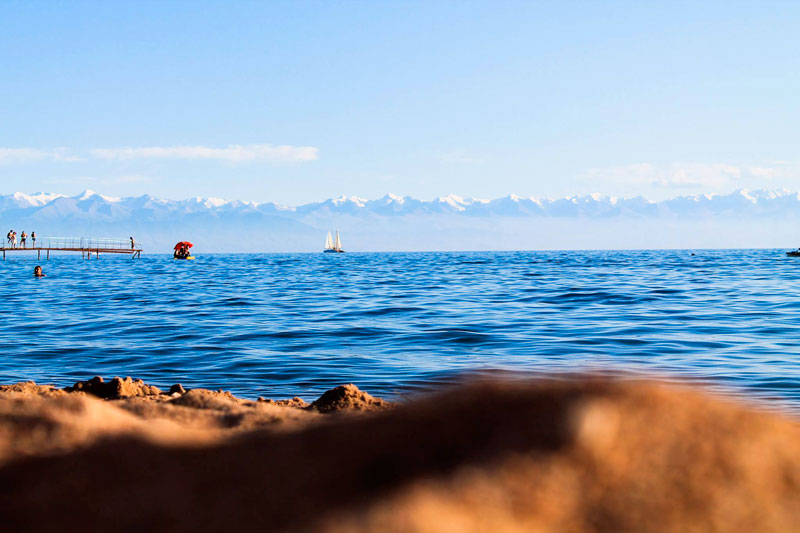 Kyrgyzstan’s rippling mountain landscape is topped with stark glaciers, accented with energetic rivers, and covered with just shy of 2,000 lakes, making it the most vibrant and green of all the Central Asian counties.  The alpine lakes of Kyrgyzstan are particularly beautiful facets of the country that Kyrgyz people take great pride in.  Before you start thinking, “Well, I should go visit one just to see what the lakes are like,” be warned that each of Kyrgyzstan’s alpine lakes radiates its own kind of beauty.  Once you’ve seen one, you’ll want to see them all.  Here a small list containing 5 of the most stunning lakes in Kyrgyzstan:

Lake Chatyr Kul is perched high in the sky at an elevation of 3530m, making it Kyrgyzstan’s 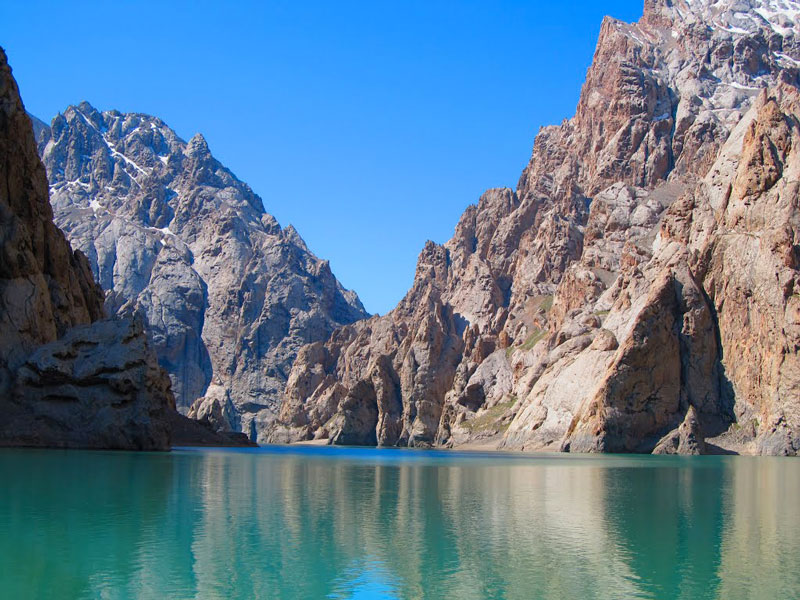 highest alpine lake.  It rests near the border with China in the At-Bashi Province in the Tien Shan Mountains. Lake Chatyr Kul freezes over from October to April and summertime temperatures only reach as high as 24 degrees Celsius.  Its waters resemble a shade of greenish-yellow and the area around the lake is home to Marco Polo Sheep and many rare bird species.

Not only does the wildlife in the biosphere roam as it pleases, but the lake itself also gives an impression to visitors that it cannot be contained. Its crisp blue-green waters wink in the sunlight as it sprawls untamed over its wild domain.

Lake Issyk Kul is by far the most visited alpine lake in all of Kyrgyzstan.  Locals have proudly named it “the Pearl of Central Asia” because of its beauty and scope.  Lake Issyk Kul is the world’s second largest alpine lake (6,236 sq km) and is enthroned in beautiful snow-capped mountains.  When I first saw it, I thought, “Oh, well it looks exactly like an ocean,” until the clouds moved and I saw the infinite mountain ranges reverberating out from it!  Unlike many of Kyrgyzstan’s other lakes, Lake Issyk Kul isn’t remote or hard to find.  Its cool summertime temperatures, crystal clear waters, and beauty attract people from all over the world.

Lake Kel Suu (3514m) is a small lake bound between stark cliffs near the Chinese border.  Its vivid turquoise waters are located in the Sary-Beles Mountains and are only accessible from July to August. Lake Kel Suu’s reclusive position and mysterious cliff-side caves appear as a beautiful enigma in the middle of Kyrgyzstan’s wilderness that you don’t want to miss.

In the Naryn Province of Kyrgyzstan, delicately perched between two mountain ranges is the 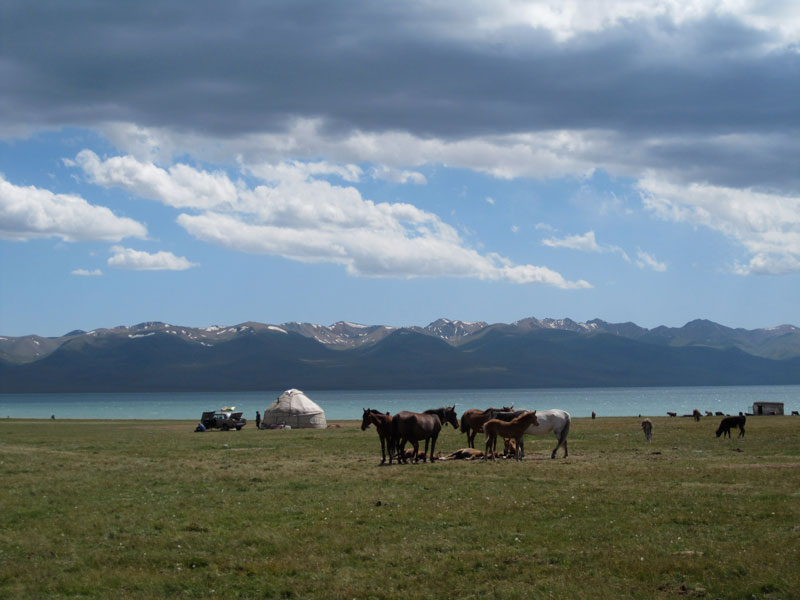 alpine lake, Song Kul.  Lake Song Kul reclines in easy elegance over mountain pastures used in summertime by nomadic families.  It’s Kyrgyzstan’s 2nd largest lake (278 sq km), but completely different than Lake Issyk Kul.  You won’t find lots of trees or crowds of people here, just a few yurt camps housing nomads and some travelers.  Lake Song Kul mostly plays host to herds of yaks, horses, cows, and sheep directed by young shepherd boys and is remote enough that you shouldn’t expect to get a signal to make any phone calls while you’re there.  It’s the ideal location for some peaceful rest and relaxation away from the buzz of civilization.

So while you’re in Kyrgyzstan, whether it’s one of these lakes or one of the hundreds of others, take some time to visit some of the country’s alpine lakes.  Each lake comes with its own unique setting and personality.  Just decide which ones peak your interest the most and go enjoy!

Photo from source: www.mountpix.livejournal.com, photo by Explorer5787, photo by shofargroup

From
$650
The price depends on a group size. The price 650 USD per person is available for groups of 4 people.
More info
7 days

From
$1150
The price depends on a group size. The price 1150 USD per person is available for groups of 4 people.
More info
4 days

From
$470
The price depends on a group size. The price 1230 USD per person is available for groups of 4 people.
More info
13 days

From
1420 €
The price depends on a group size. The price 1420 EUR per person is available for groups of 4 people.
More info
Login
Signup
Forgot password?