In this article we will describe the most popular and marvelous natural sights of Xinjiang Uygur Autonomous Region (Urumqi) that you can add to your Travel China Must visit list.

Lake Tianchi, located at an altitude of 200 meters above sea level on the slopes of the Bogdo-Ula ridge, 110 kilometers east of Urumqi, is often called the “pearl of Tibet”. Before the lake was called Yaochi, which translates as “jade lake.” In 1783 a modern name appeared, which means “Heavenly Lake”.

Lake Tianchi was formed as a result of the glacier, it has the shape of a crescent with a length of 3.4 km and a width of 1.5 km. Thetotal area of ​​the lake is 4.9 square km, the maximum depth reaches 105 meters. The water in the lake is amazingly clear and transparent, and the scenery along the banks resembles the Alpine – dense coniferous forests surrounded by snow-capped mountain peaks. All this adds quite a special charm to these places.

Tourists who come to China, to the area of ​​Lake Tianchi, should see the following attractions: “Shimen” (stone gate), “Luntan Bioye” (Emerald crescent on the Dragon Lake), “Rock supporting the sky”, rock

“Sacred Needle”, “Snowy Landscape “,” Pines and fir “,” Morning Fog “and” Flying Falls “. In ancient times there were a lot of cultbuildings nearby, but to this day only the ruins of several monasteries have been preserved.

This mountain chain in the Turfan basin had formed about 50 million years ago. The  mountains are one of the spurs of the Tien Shan, they have a length of 98 kilometers and a width of 9 kilometers. The highestpoint is 832 meters above sea level. 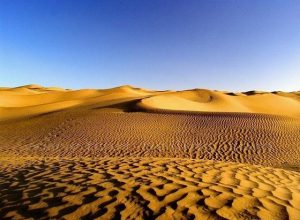 Its name was given to the mountains because of the characteristic reddish color of the sandstone and the bizarre shape of the slopes. This combination under certain lighting (usually at sunset) makes the rocks looking like a flame.

In addition, the Turfan basin, in which the mountains are located, itself is also called “fiery  land.” The highest recorded airtemperature here is + 49.6 ° C, and the land temperature is + 82.3 ° C.

Pasture of the Southern Mountains of Nanshan

Two hours’ drive from the city of Urumqi, at the foot of the Nanshan Mountain, there is a natural Southern pasture. On the local

emerald meadows, thousands of cows are grazed, which are kept by local Kazakhs – they appeared here several hundred years ago and still lead the same lifestyle as their ancestors.

For a fee, you can rent a horse from them and make an unforgettable horse ride. Lovers of romance will be able to rent a yurt for the night, as well as taste dishes of local cuisine cooked according to traditional recipes.

Southern pasture is a favorite place for recreation of locals and visiting tourists. The main local attraction is the glacier, located inthe upper part of the mountain. The height of the glacier reaches two thousand meters. To get to it, it is best to use the services of a guide.

Kunlun Mountains, one of the largest mountain systems in Asia, is located in China. It extends in a direction close to latitudinal, from the Pamirsin the west to the Sino-Tibet mountains in the east, bordering Tibet from the north.

The highest peak of Kunlun Mountains is Aksai-chin that exceeds 7000 meters. The vast majority of the numerous “six-thousanders” is still not subdued here. In the central part of the mountains lies the Arkatag Range (the Przheval’skiy Range). Unlike other great mountain systems of Central Asia, active volcanoes exist in the Kunlun Mountains. Volcanoes occupy a strip with a length of 1,050 kilometers from west to east. Through the Kunlun Shan Kou pass lies the road to Tibet and in 2006 the railway Kunlun tunnel was opened.

Takla-Makan is a desert that is located in the Xinjiang Uygur Autonomous Region, in the west of China. It is the largest of the sand deserts of the world, its area is over 300 thousand square kilometers. The relief of the desert varies from the lowlands in the north-east to the sandy ridges of complex configuration, also called whale backs and pyramids up to 300 meters.

Through this desert from the beginning to the end runs only the river Khotan, which crosses the desert even in the summer. All other rivers flowing from Kun-Lun penetrate deep into Takla-Makan for a maximum of 200 kilometers and gradually dry out in the sands.

Most of the desert has no vegetation, only here and there there are rare thickets of tamarisk, saltpeter, reed. On the outskirts of the desert and in river valleys there are poplar, loch, camel thorn, annual saltworts and saxaul.

Visit to these impressive natural sights of this part of China will make your holidays truly bright and unforgettable!