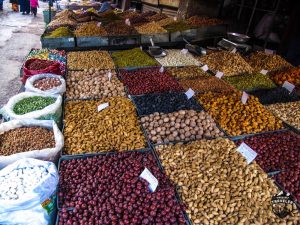 This is the second article devoted to the most popular attractions of Xinjiang Uygur Autonomous Region (Urumqi) that you can add to your Travel China Must visit list. We will advise you to visit 5 most amazing historical and architectural sites of this region.

One of the oldest and largest open air markets in the world is located in Kashgar, China, attracting many tourists from all over the world. And this is not surprising – in fact, in the Middle Ages, this city was the main trade point on the Great Silk Route. Sunday market is a place where you can buy everything you want. You will be definitely impressed by the number of trays, the variety of goods and colorful clothes of market visitors. And there are a lot of visitors here, because up to 200 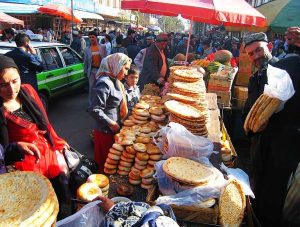 thousand people come here during the day, so it’s better not to come here for people with agoraphobia and ochlophobia.

It is difficult to imagine what can not be bought here, because with a great desire, you can buy here even a horse or donkey, and of course, plenty of souvenirs, ceramics, clothes. Well, for all tired and hungry visitors, amazing Asian cuisine in local cafes will brighten up their Sunday shopping.

Pagoda Sugun – the only Muslim tower-minaret in China, the largest ancient tower in Xinjiang. It is a valuable architectural monument and is protected by the state. 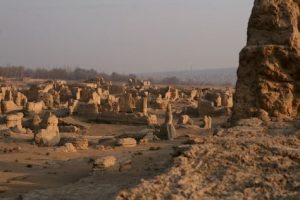 Pagoda Sugun (also known as the minaret of Imin) is a monument of Muslim architecture. It was built on the initiative of theTurfan ruler Imin as a token of gratitude to the Chinese Emperor Qianglong for the mercy granted to them. However, Imin himself did not have time to finish the construction. The minaret’s construction  was  finished by his son, Prince Suleiman. This happened in 1778.

Today, the minaret is a 40-meter building. It has a domed shape, the diameter of the base is 10 meters. At the entrance there are two stelae with carved letters in Chinese and Uighur languages.

In the center of the pagoda is a spiral staircase, along which you can climb to the very top of the building. The upper part of theminaret is an arbor, from which an excellent view of the surroundings opens up. The tower of the minaret harmoniously combines with the Muslim Mosque, located nearby, forming a single architectural ensemble.

Jiaohe Mound – the largest and oldest in the world, well-preserved hillfort. Its total area is 430 thousand square meters. Two rivers, bounding the city from the east and west, make it look like a willow leaf on the map. 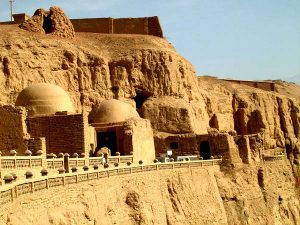 Jiaohe was built more than 3000 years ago and therefore is the most ancient city in the Turfan hollow. However, now the city is completely uninhabited. Residents left it at the end of the XIII century, when it was destroyed as a result of a major battle.

During its heyday, Jiaohe was a large fortress, and near ​​its eastern gate you can see the well preserved watchtowers, outposts, sentries and basements.

Among the ruins you can also find buildings that were once objects of religious worship. For example, at the end of the central street there is a large Buddhist temple complex. Its walls were preserved almost in its original form. The facade has a large courtyard, and behind it – Buddhist pavilions with altars. From the east and west there are rows of rooms that were the living quarters for monks.

The ruins of Jiaohe are of great interest to archaeologists and historians who come here to find out what secrets are hiding these ruins.

The largest well of the Jiaohe fortress. Despite the fact that the city itself is uninhabited for the last several centuries, the well has been preserved almost in its original form. It is located in the administrative quarter of the ancient settlement.

The age of the well, like that of Jiaohe itself, is about 3000 years. However, it looks exactly like modern wells: a small well on a paved road with small tiles and vertical piles, to which a cross beam with a cable is attached. The use of the well was similar to the modern one.

The ancient city of Gaochang

Gaochang is the ruins of a once rich, prosperous city. This city, located in the south of the Gobi Desert, in its best years was often compared to a magnificent gem, framed by a lifeless desert.

Gaochang was built in the I century BC. Subsequently, it had taken one of the key positions on the Great Silk Route. This ensured the financial and commercial prosperity of the city. On the same path, Buddhism came to Gaochang, and here one of the first centers of this religion was formed in China. Even now, among the ruins in the streets of Gaochang, you can find buildings that are very similar in appearance to Buddhist sanctuaries, where altars and niches for Buddha statues have been preserved.

The city was destroyed, after having existed for almost 1300 years, in the 13th century during the war between the Mongols who subdued Chinaand the Uighurs. Residents did not stay long in the ruined city, Gaochang very quickly completely emptied.

Today, its former grandeur is reminded only by the ruins of the impressive city walls made from raw bricks. However, the Chinese government intends to reconstruct the monument of architecture and allocates huge funds for this purpose.

Gaochang is open for tourists. Near the gate there are constantly on duty wagons, by which for a small fee you can make a tour of the city and try to imagine ancient Gaochang during its heyday.

Tour of the Fergana Valley

The Fergana Valley is the land of hereditary artisans who have retained the ancient secrets of the manual production of silk and original ceramics until our days. In the valley you can visit ...

We would love to invite you to our New Year party, which you will celebrate away from your everyday problems in an atmosphere of oriental fairytale!   The New Year tour to Uzbekistan includ ...