Tbilisi is a beautiful city with a big and rich history. Walking around Tbilisi you discover continuously something new, especially the old part, which is known as the soul of the city will definitely enchant you. There is a famous legend how the city was founded. In 458 the territory of Tbilisi was covered by forests. When, the King Vakhtang I Gorgasal was hunting in the forest, his falcon attacked the deer, and the injured animal ran to the sulfur spring, the body healed itself with water and ran away. Surprised after seeing this occasion, the king ordered to build a city on this spot. The name Tbilisi (Tiflis) comes from  georgian word “tbili”, meaning “warm”, due to the warm sulfur springs on its territory. 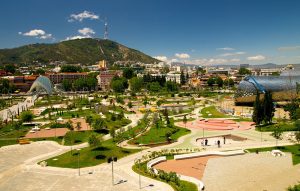 To fall in love with Tbilisi, it is best to stroll around with a local guide. We recommend you to start your acquaintance with Tbilisi from the main avenue Rustaveli, which is Tbilisi city – center. You will find on its street everything – theaters, museums, monuments, cozy cafes and restaurants, shops, street musicians (closer to the evening) very beautiful buildings. The avenue is especially stunning by evening when the lights are everywhere.

One of the main decorations of the city, a symbol of its modern look is the Bridge of Peace. It connects the two banks of the Kura River, the old part of the city with the new one. Bridge looks interesting in the evening, when the lights are turned on. The lightbulbs built into the framework by Morse system, transmit 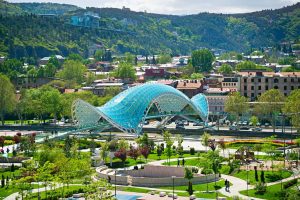 the encoded information containing the DNA of each person. Besides of this modern bridge, there are many other no less interesting bridges.

Another place to visit in Tbilisi is cable cars. They are very popular among the guests of the capital. It serves as a fairly good entertainment and at the same time it connects the new modern Rike Park with the ancient fortress Narikala, located on the top of one of the hills. You can ride the cable car regardless of the season.

Fragments of the oldest in this city Narikala fortress remained on Mtsatminda mountain. 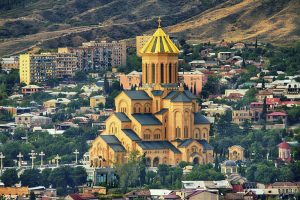 The local people call this landmark as “the heart and soul of the city.” The fortress was built in the IV century and adorns Tbilisi since its foundation. Ove the several centuries, the construction of fortress was completed by various nations that had influence on this territory: in the VII century by the Arabs, and in the XI century by the Mongols. The earthquake of 1827 partially destroyed this local landmark, but the reserved part of architectural monument still attracts tourists.

On the territory of fortress in the XII century St. Nicholas church was built, which was recently reconstructed. It attracts the attention of tourists by the fact that its interior is decorated with fresco paintings depicting Georgian history and scenes from the Bible.

Tbilisi is undoubtedly an amazing city, exploring of which can take several days. Read the second part of the article to learn more about Tbilisi sights.