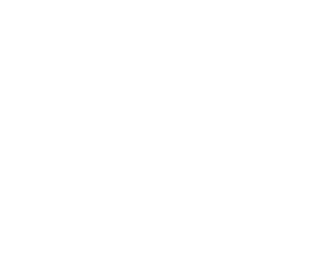 Kyrgyzstan – is a country located in Central Asia. Landlocked and mountainous, Kyrgyzstan is bordered by Kazakhstan to the north, Uzbekistan to the west, Tajikistan to the southwest and China to the east. Its capital and largest city is Bishkek.

The official language, Kyrgyz, is closely related to the other Turkic languages; however, the country is under a strong cultural influence from Russia and is rather Russified. The majority of the population (64%) are nondenominational Muslims.

Kyrgyzstan is a member of the Commonwealth of Independent States, the Eurasian Economic Community, the Collective Security Treaty Organization, the Shanghai Cooperation Organisation, the Organisation of Islamic Cooperation, the Turkic Council, the TÜRKSOY community and the United Nations. 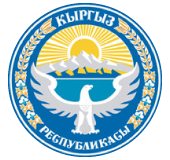 “Kyrgyz” is believed to have been derived from the Turkic word for “forty”, in reference to the forty clans of Manas, a legendary hero who united forty regional clans against the Uyghurs. Literally it means We are forty. At the time, in the early 9th century AD, the Uyghurs dominated much of Central Asia (including Kyrgyzstan), Mongolia, and parts of Russia and China.

The 40-ray sun on the flag of Kyrgyzstan is a reference to those same forty tribes and the graphical element in the sun’s center depicts the wooden crown of a yurt – a portable dwelling traditionally used by nomads in the steppes of Central Asia.

REGIONS AND DISTRICTS OF KYRGYZSTAN

Kyrgyzstan is divided into seven regions (sing. oblast) administered by appointed governors. The capital, Bishkek, and the second largest city Osh are administratively independent cities with a status equal to a region.

The regions, and independent cities, are as follows: 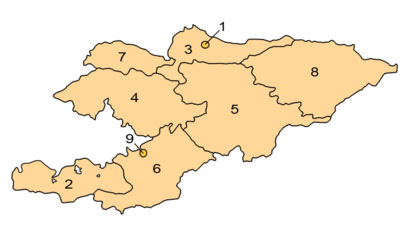 Each region comprises a number of districts (raions), administered by government-appointed officials (akim). Rural communities (ayıl ökmötü), consisting of up to 20 small settlements, have their own elected mayors and councils.

The climate varies regionally. The south-western Fergana Valley is subtropical and extremely hot in summer, with temperatures reaching 40 °C (104 °F) The northern foothills are temperate and the Tian Shan varies from dry continental to polar climate, depending on elevation. In the coldest areas temperatures are sub-zero for around 40 days in winter, and even some desert areas experience constant snowfall in this period.

Islam is the dominant religion of Kyrgyzstan: 80% of the population is Muslim while 17% follow Russian Orthodoxy and 3% other religions. A 2009 Pew Research Center report indicates a higher percentage of Muslims, with 86.3% of Kyrgyzstan’s population adhering to Islam. The majority of Muslims are non-denominational Muslims at 64% while roughly 23% are Sunni, adhering to the Hanafi school of thought. There are a few Ahmadiyya Muslims, though unrecognised by the country. During Soviet times, state atheism was encouraged. Today, however, Kyrgyzstan is a secular state, although Islam has exerted a growing influence in politics. For instance, there has been an attempt to arrange for officials to travel on hajj (the pilgrimage to Mecca) under a tax-free arrangement.

While Islam in Kyrgyzstan is more of a cultural background than a devout daily practice for many, public figures have expressed support for restoring religious values. For example, human rights ombudsman Tursunbay Bakir-Ulu noted, “In this era of independence, it is not surprising that there has been a return to spiritual roots not only in Kyrgyzstan, but also in other post-communist republics. It would be immoral to develop a market-based society without an ethical dimension.”

Additionally, Bermet Akayeva, the daughter of Askar Akayev, the former President of Kyrgyzstan, stated during a July 2007 interview that Islam is increasingly taking root across the nation. She emphasized that many mosques have recently been built and that the Kyrgyz are increasingly devoting themselves to Islam, which she noted was “not a bad thing in itself. It keeps our society more moral, cleaner.” There is a contemporary Sufi order present which gives a somewhat different form of Islam than the orthodox Islam.

The other faiths practiced in Kyrgyzstan include Russian Orthodox and Ukrainian Orthodox versions of Christianity, practiced primarily by Russians and Ukrainians respectively. A small minority of ethnic Germans are also Christian, mostly Lutheran and Anabaptist as well as a Roman Catholic community of approximately 600.

A few Animistic traditions survive, as do influences from Buddhism such as the tying of prayer flags onto sacred trees, though some view this practice rooted within Sufi Islam.There are also a small number of Bukharian Jews living in Kyrgyzstan, but during the collapse of the Soviet Union most fled to other countries, mainly the United States and Israel. In addition, there is a small community of Ashkenazi Jews, who fled to the country from eastern Europe during the Second World War.

On 6 November 2008, the Kyrgyzstan parliament unanimously passed a law increasing the minimum number of adherents for recognizing a religion from 10 to 200. It also outlawed “aggressive action aimed at proselytism”, and banned religious activity in schools and all activity by unregistered organizations.It was signed by President Kurmanbek Bakiyev on 12 January 2009.

The cuisine of Kyrgyzstan is similar in many respects to that of its neighbors, particularly Kazakh cuisine. Traditional Kyrgyz food revolves around mutton and horse meat, as well as various dairy products. The cooking techniques and major ingredients have been strongly influenced by the nation’s nomadic way of life. Thus, most cooking techniques are conducive to the long-term preservation of food. Mutton (lamb) is the favorite meat, although many Kyrgyz are unable to afford it regularly.

Kyrgyzstan is home to many different nationalities and their various cuisines. In larger cities, such as Bishkek, Osh, Jalal-Abad, and Karakol, various national and international cuisines can be found. On the road and in the villages, the cuisine tends to be standard Kyrgyz dishes, liberally flavored with oil or sheep fat, which are considered both delicious and healthy by the local population.

The traditional national sports reflect the importance of horse riding in Kyrgyz culture.

Very popular, as in all of Central Asia, is Ulak Tartysh, a team game resembling a cross between polo and rugby in which two teams of riders wrestle for possession of the headless carcass of a goat, which they attempt to deliver across the opposition’s goal line, or into the opposition’s goal: a big tub or a circle marked on the ground.

Other popular games on horseback include:

At Chabysh – a long-distance horse race, sometimes over a distance of more than 50 km Jumby Atmai – a large bar of precious metal (the “jumby”) is tied to a pole by a thread and contestants attempt to break the thread by shooting at it, while at a gallop Kyz Kuumai – a man chases a girl in order to win a kiss from her, while she gallops away; if he is not successful she may in turn chase him and attempt to beat him with her “kamchi” (horsewhip) Oodarysh – two contestants wrestle on horseback, each attempting to be the first to throw the other from his horse Tyin Emmei – picking up a coin from the ground at full gallop

One of the most popular tourist destination points in Kyrgyzstan is Issyk Kul Lake. Numerous hotels, vacation resorts, boarding houses and sanatoriums are located along its Northern shore. The most popular beach zones are in the city of Cholpon-Ata and the settlements nearby, such as Kara-Oi (Dolinka), Bosteri and Korumdy. The number of tourists visiting the lake was more than a million a year in 2006 and 2007. However, due to the economical and political instability in the region, the number has declined in recent years.

For those interested in trekking and camping, every region offers attractions and challenges. Some of the most popular locations for camping are southern Osh, the area between Naryn City and the юрты-у-озера-Daniel-KorzhonovTorugart pass, and the mountains and glaciers surrounding Karakol in Issyk-Kul.Local guides and porters can be hired from many tour companies in Bishkek and in the provincial capitals.

Skiing is still in its infancy as a tourism industry, but there is one fairly cheap and well-equipped base about a half-hour from Bishkek. The ski base of Toguz Bulak is 45 km (28 mi) from Bishkek, on the way to Issyk Ata valley. In the Karakol Valley National Park, outside Karakol, there is also a ski base with three T-bars and rental equipment available of good quality.